What You Missed - Randwick 4th January

They are $51 and $101 respectively in TAB's Golden Slipper market, and the race isn't until March, but trainers Anthony Cummings and Chris Waller believe Philizzy and Osamu are worthy of being set for the $3.5 million feature after they ran one-two at Randwick on Saturday.

Philizzy, a $340,000 purchase, produced a strong finish to reel in Osamu, who set his owners back $1.7m, in the Hyland Race Colours Handicap (1150m) and Cummings said even if she made the Magic Millions field the filly is good enough for the big dance.

"She still has a lot to learn, doesn't quite know what to do but there's a lot of talent and she'll be a lot of fun for a couple of years to come,'' he said. 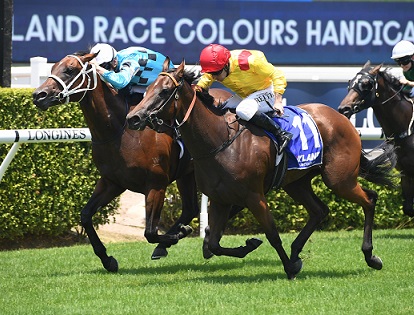 Osamu (left) and Philizzy fight it out at Randwick. (Pic: Steve Hart).

"I'm not sure I want to take the trip (to the Gold Coast), I'm more inclined to wait and try and get her ready for the Slipper.''

Osamu strode to the lead under James McDonald inside the 300m and appeared the likely winner but Waller said inexperience probably cost him at the business end.

But the defeat did nothing to change his view that he's worthy of a Slipper campaign.

"It's very typical of one of our two-year-olds, he's been well looked after and today is the first time he's been under any pressure and he got a bit lost when he was in front,'' Waller said.

"It was no-one's fault, certainly not the horse's, he will improve immensely with the run and I think he is a genuine autumn carnival horse.''

Waller said Osamu will spend a few days out next week and return to the stable on Monday week with the Skyline Stakes, three weeks out from the Golden Slipper, his likely return.

Meanwhile, Waller's Breeders' Plate winner Global Quest makes his first public appearance since the spring in a barrier trial at Randwick on Thursday.

The colt is currently on the second line of Slipper betting at $15 and Waller is rapt with how he's come on in his break.

"He's developed into a lovely horse, has a great attitude and I can't fault him. I'm really excited by him,'' he said.

Adelong Lashed But Gallant In Defeat

The sectionals in the early stages of the Schweppes Handicap (1100m) tell the story of how Brad Widdup's talented mare Adelong lost her unbeaten record and why she'll be a horse to follow later this year.

Punter's Intelligence sectional data reveals the mare broke 18 seconds for the first 300m, running 7.77 from the standing start then a sizzling 10.15 between the 1000m and 800m.

Lashes sat back and enjoyed the likes of Spiritual Pursuit serving it up to Adelong then reeled off a last 600m of 34.32, more than two lengths faster than anything else.

Jockey Christian Reith said he didn't get a moment's peace on Adelong and it's a sign of her talent that she was able to hold off everything else and finish second.

"She handled herself really well. She's a good horse, she's tough and I was happy with the run,'' Reith said.

"She got pressured the whole way and kept battling it out. Next time around she'll be even better.''

Trainer Brad Widdup confirmed his pre-race comments that the four-year-old will now have a spell and even in defeat he couldn't be disappointed with the effort.

"You can't leave them home in the box you have to have a go,'' he said.

"She's done a good job, she'll go out now for a break and we'll have a bit of fun next time in.''

Don't expect to see emerging apprentice Tom Sherry riding in the city until next season despite the young Irishman's stunning introduction to Australian racing.

Sherry, 21, had his first race ride since joining Mark Newnham back in early October and ahead of Sunday's Wyong meeting he's already ridden 31 winners this season to be second in the NSW apprentices title behind Samantha Clenton.

Newnham said Sherry has impressed him with how quickly he's reducing his claim, which is now 2kg, but is sticking solid with the formula that proved successful with his 'other' apprentice Robbie Dolan.

"Tom's down to 2kg now but as I say to him once that claim reduces you have to reduce your mistakes also because when you are claiming 3kg it will cover up some of your mistakes,'' Newnham said.

"He's also been the beneficiary of having a good platform laid by Robbie who is a good rider, well liked, and trainers have got confidence in him.

"Tom has been given more opportunities because of that. When Robbie started with me I was only kicking off as well and didn't have many runners to put him on. He had to do a lot harder yards than Tom has had to.''

So Sherry's graduation to the metro area won't happen until he outrides his provincial claim, or close to it, because Newnham said he still has a lot to learn.

And why mess with the formula that has produced the past two champion Sydney apprentices?

"It means by the time he's come to town he'd have ridden close to 80 winners which means he will be riding at a good enough standard to ride against the top guys but also have the assistance of the 3kg claim,'' he said.

"That path served Robbie well and it served Rachel King well before that.''

Flight Stakes runner-up Probabeel made a low key return to racing with an easy win at Awapuni on Saturday and trainer Jamie Richards said there's a chance she'll be back in Sydney as soon as next month.

Probabeel chased home Funstar in the spring Group 1 back in October and Richards is setting her for the $1m Karaka Classic on January 25 before he assesses her Australian preparation.

"We don't think there is any rush to get her up in trip, I think a mile at this stage suits her until she shows us she wants to go a bit further,'' Richards said.

"Whether she goes to Sydney or Melbourne we're not 100 per cent sure, we've been tripped up a couple of times by wet tracks and she needs good ground but the Surround Stakes in Sydney is an option.''

Probabeel won a 1400m three-year-old event at Awapuni by a comfortable length and a half and Richards said there's plenty of improvement to come ahead of the $1m mile in three weeks.

'Quirky' was the buzzword attached to the personality of Maroubra Handicap (1550m) winner Mushaireb and on the evidence of his pre-race antics and what happened on the track it's an apt description.

Jockey Rachel King had all sorts of trouble being legged aboard the gelding in the parade and didn't make it onto his back until well into the tunnel then shortly after they led into the straight he was headed and looked gone before rallying to win.

"He always gets a bit worked up coming out of the yard, he knows what it's all about,'' King said. 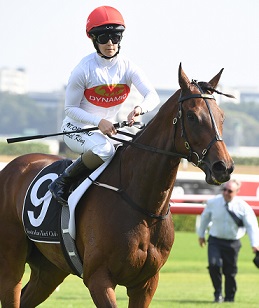 Mushaireb started out with Brad Widdup, had one start for Gai Waterhouse and Adrian Bott in August 2018 before switching to Richard and Michael Freedman who have been in charge for his last eight starts.

King said when Sir Plush gave her mount a bump about the 300m it woke him up and he responded to the challenge, kicking back and running down Reflectivity with Sir Plush back in third.

"He showed his fight and fought back hard, he was floating a bit at the top of the straight so he probably needed a bit of competition. I didn't need it to be that close,'' she said.

A week ago Mushaireb was a beaten favourite in an 1800m race won by Berdibek on the course proper and didn't see a lot of daylight but Freedman says he tends to protect himself when in behind horses.

So it was announced he'd be leading to take make that quirk less of an issue for Mushaireb and he repaid the punters' faith.

"You never know what you're going to get, I thought half way down the straight he was going to give up the ghost then he rallies again,'' Freedman said.

"He just has to get his own way at times, we have to train him that way as well, when he's got his mind on the job he can really gallop. When he fought back I knew he'd keep fighting back.''