What You Missed - Randwick 21st September

The best is yet to come from Godolphin’s super import Avilius after he smashed a classy field in the Group 1 $500,000 Colgate Optic White Stakes (1600m) at Randwick.

That was the sentiment from trainer James Cummings after the six-year-old’s last to first effort to claim his third Group 1 by a widening 2-1/4 lengths.

“That was a ripping performance from the horse. I think very impressive,’’ Cummings said.

“It is an interesting feeling when you feel you are only part way through the horse’s campaign.

“He was third up today and he had to be up to a certain level to put a horse like Dreamforce away.

“We’ve been confident in the horse all the way along. We haven’t lost any confidence in him. A great ride from Kerrin to bring him into the race off that kind of pressure. It’s what we needed to see.”

The Punter’s Intelligence sectional data highlights just how explosive Avilius is when he can get his toe into the ground and travel smoothly.

He clocked easily the fastestr last 600m of the race, running 34.33 which was over five lengths faster than the next best, and his last 200m of 11.84 was more than two lengths quicker.

“When Kerrin (McEvoy) was able to sweep up into the race he was going to be the strong horse late,’’ Cummings said.

It was McEvoy's second win in the George Main Stakes some 18 years after his first on Viscount in 2001. Avilius will now head to Melbourne to continue his spring campaign.

Still on Godolphin and Cummings will take the covers off last season’s top two-year-old Microphone at Tuesday’s Warwick Farm trials.

The trainer said he has kept the Golden Slipper runner-up and Sires’ Produce winner back intentionally with the view a light spring will reap rewards over the next six months.

“He looks great and he will need a nice blow out at the trials, that should bring him on well and truly,’’ Cummings said.

“We wanted to give him a bit more time, we had in mind he’d had a long campaign and if we waited a little longer we could wait for set weights races and he would be well suited.

“He’ll have a bit of work after the trial to get him right for the 12th (October).

Microphone will resume in the Group 2 $300,000 Roman Consul Stakes (1200m) ahead of a trip to Melbourne for the Group 1 Coolmore Stud Stakes.

Golden Slipper winner Kiamichi is also likely to appear at the Warwick Farm trials and it seems her spring is at a cross road after two runs back from a spell,

“We won’t get ahead of ourselves beyond the trial, we’ll get a guide on how she is feeling and make a decision straight after that,’’ Cummings said.

She’s nominated for both the Golden Rose (1400m) and Heritage Stakes (1100m) – a Golden Rose start seems unlikely but if she did line up it would keep her chances of the Golden Slam and a $5 million bonus alive for any horse that wins the Slipper at two, Rose at three and Golden Eagle at four.

Libertini At A Spring Crossroad

Trainer Anthony Cummings has all but ruled out the Group 1 Flight Stakes for Libertini after her defeat in the Darley Tea Rose Stakes at Randwick, placing a question mark over her at 1600m.

Libertini (inside) fights out the Tea Rose with Funstar (centre) and Probabeel. (Pic: Steve Hart).

Libertini finished third behind Funstar and Probabeel in a tight finish to the Tea Rose (1400m) and while she wasn’t disgraced Cummings concedes the first two home may have her measure over further.

Cummings said there are three options for Libertini - to go the Flight, which is unlikely, freshen up for the Coolmore Stud Stakes in Melbourne, or a spell.

“Logically the two fillies that finished alongside her are going to be stronger at the mile than I think we are likely to be. That was my view,’’ he said.

“Having said that the play of the race was still against her and she had to work harder in that first past whereas the others didn’t.’’

Cummings pointed to the section between the 1200m and 1000m as the part of the race that bought Libertini undone as jockey Tommy Berry had to work to get her up outside the leader Anaheed.

Funstar and the way she was ridden aggressively in the first part was part of the reason why we were weak at the finish,’’ Cummings said.

“They slackened off after that and she got a soft sectional past the half mile but I think the damage was done.

“The others had the drop on her and it took the length of the straight for them to get her.’’

Lees Biding His Time Until The TAB Everest

Trainer Kris Lees has outlined his program for TAB Everest runner In Her Time to tackle the $14 million feature first-up after he pulled her out of the Shorts.

The seven-year-old, slot holder Inglis’ runner, worked at Newcastle on Saturday morning and will have a jump out at home and likely an official trial 12 days before the TAB Everest.
Lees said he is more than comfortable with that plan.

“She’s won two Group 1 races and they were both first-up so it doesn’t worry me that much,’’ he said.

“I knew it was a soft 7 before I scratched, she’s not 100 per cent fit and I was concerned if it was a testing track it’d be detrimental to how she came out of the race.’’

In Her Time galloped over a half mile instead of taking her place in the Group 2 sprint and Lees said he’s still to lock in a jockey for the Everest ride.

The mare is a $15 chance in the TAB Everest market with four weeks until Australia’s richest race.

It’ll be another week or so before Matthew Dale makes a call on which horse could represent him in the $1.3 million The Kosciuzsko (1200m) on TAB Everest Day. 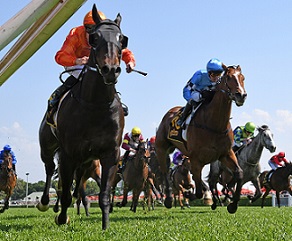 Following Notation’s second placing in the Group 3 Tibbie Stakes at Newcastle on Friday she’s very much an option now she has that stakes placing while Super Star Bob put himself in the mix with a closing second in the Schweppes Handicap (1400m) at Randwick.

Dale said he plans to run Coup De Main next weekend and then have a serious look at his options with slot holder Rod Thompson.

“The thing I have to question about Super Star Bob, he is a horse that might be at his best at 1400m and maybe even a mile but we’ve never had a set of blinkers on him,’’ Dale said.

“Just watching him as he came off the bridle a set of blinkers will help him, a month between runs into a Kosciuszko where they’ll run along.

“Coup De Main runs next weekend. I thought for him to be my Kosciuszko horse he should have won last week even with the big weight, he’s an up and coming horse that could improve sharply.’’

Dale said there is a chance Notation could go up in distance to the Group 3 Angst Stakes (1600m) if she’s not selected for The Kosciuszko where she's $11 with TAB.

Meanwhile the jury could be out on Don’t Give A Damn and Suncraze after they were unplaced in the E-Group Security Handicap (1200m), their only appearance prior to The Kosciuszko.