What You Missed - Kensington 17th August

No Panic For Pandemic
After a few nervous moments for his backers, Pandemic charged to the line when finally clear to record a dominant win.

Punters Intelligence reveals the three-year-old, a half brother to Earthquake, ran his last 600m in a sizzling 32.37s, clocking 10.63s for his last 200m.

"It's very exciting what he did," said Tommy Berry, "He let down from a standing start which not many young horses can do. I have an opinion of (runner up) Maddi Rocks myself so to be stopped in his tracks to beating a good filly very easily, he has the makings of a lovely horse."

"I rode him at Wyong and the way he let down there I wasn't too disappointed to be held up to the furlong. You look at the first half of his race and he feels like a  horse that hasn't even trialled yet, he climbs in his action, his head is high, he is off the bridle and the further the race goes he becomes more tractable. He was very impressive the last 100m when he started to pull away."

Godolphin's Darren Beadman suggested that there could be a stakes race for Pandemic over the spring.

How smart is Pandemic?!

That’s two from two for the gelding and he looks destined for bigger and better things @godolphin pic.twitter.com/di6aLawMcA

Te Akau Shark settled out the back and was forced to make a long, sustained run in the testing heavy conditions.

Michael Guerin reported that trainer Jamie Richards was happy with the return and it's all systems go towards the G2 Tramway Stakes (1400m) on September 7 at Randwick.

From there, he has his sights set on the $1m Epsom for which he remains a $7 favourite with TAB Fixed Odds ahead of Doncaster winner Brutal ($8).

Endless Drama gets the chocolates in Race 6 at Te-Rapa (NZL) but check out the massive run from Te Akau Shark from @TeAkauRacing 👌 pic.twitter.com/vF2b9MXKYh

Wolfe Stalks Staying Features
Wolfe ran up to his looks upon resumption on Saturday and now co-trainers Gai Waterhouse and Adrian Bott have their sights set on Group Ones.

The five-year-old paraded in outstanding order and having parked outside of stablemate Stampede in the run, won by a comfortable margin. TAB reacted by moving Wolfe's price for The Metropolitan from $15 into $11, a race that the stable are certainly considering.

"It's the race that is most likely if he was to remain in Sydney, it'd be a really good target for him. It just depends on what we'd like to achieve in Melbourne and what the best lead up would be," said Bott.

"Everything is open to him, we haven't committed, we just wanted to see him take that next step today which he did.

"He didn't have long out from his last run, he only had a short time in the paddock, and after a couple of nice trials he had a good foundation for today."

Don't Call It A Day On Wren
Wren's Day may have looked plain on debut but James McDonald warned punters to be forgiving.

The Godolphin import, off the back of one 900m trial, was crunched late in betting to jump $2.50 with TAB but after coursing a wide trip, his run ended well before eventual winner Girl Tuesday. 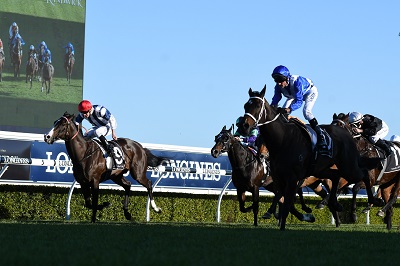 "He'll take a few runs to get to where they expect him to get but I think once he gets over the middle distances he'll come into his own," said McDonald, "He definitely needed it."

Girl Tuesda returned where she left off and Glen Boss was taken by the mare's strength over the final 400m.

"She was pretty impressive and I'm tipping the sectionals will back up how it looked. It felt like I was really quickening through the line," said Boss.

Punters Intelligence reveals that Girl Tuesday's last 600m was 33.20s, three lengths faster than the next best which was Etymology (33.64s).

IF YOU MISSED IT: Libertini sparkled in her exhibition gallop but plenty of stars where on show