Rothfire Out Of Everest After Dramatic Rose Meeting

Jim Byrne thought Rothfire was the Golden Rose winner at the 400m, by the 300m he knew he was in trouble.

The washup of the gelding’s shock fourth placing revealed Rothfire pulled up three out of five lame and was later discovered to have a sesamoid injury which has ended his TAB Everest prospects.

Rothfire started a long odds-on favourite and Byrne told stewards he initially thought the wind was playing havoc with his horse but it became apparent past the post there were other factors. 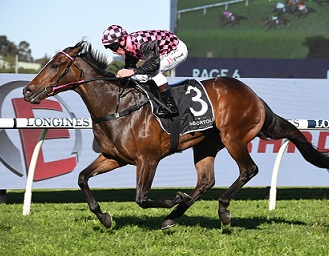 He dismounted on pulling up and the horse was walked back to the mounting yard.

“When he didn’t let down straight away I thought something wasn’t right.”

On Sunday morning Rothfire was officially ruled out of the TAB Everest, trainer Robert Heathcote said the injury appears to have presented around the 200m mark as the horse visibly took a mis-stride.

"He was there to win the race and he faltered. When he faltered that’s when he stopped. He’s brave, he’s done a super job to finish the race off,'' Heathcote said.

"It couldn’t be a worse outcome. Not only do you get beaten as an odds-on favourite but to lose your horse to a possible career ending injury.

"He has a fractured sesamoid, it’s pretty serious, we don’t know the full extent of it yet."

Heathcote said it's disappointing for everyone involved that Rothfire's Everest mission is over but the horse's welfare comes first and he'll be given all the time he needs to recover.

Slot holder MiRunners has begun the process of selecting a replacement runner for the October 17 race.

Meanwhile, Chris Waller isn’t any closer to working out which horse will fill his slot after Haut Brion Her finished unplaced in the Group 2 Golden Pendant.

Like Rothfire, Haut Brion Her had to work to find the lead and couldn’t sustain the run as stablemate Subpoenaed, whose next run will be the Silver Eagle, swept home to win.

“I think she is a 1200m horse at this stage. James (McDonald) said she was keen early and he just had nowhere to go,’’ Waller said of Haut Brion Her.

“We won’t be not having a runner, it’s three weeks away so a lot with happen between now and then.”

Haut Brion Her drifted from $21 to $51 in the TAB Everest and if she doesn't take Waller's slot it's likely she'll contest the Sydney Stakes on Everest Day.

Waller said Everest favourite Nature Strip will have as quiet a trial as possible on Monday, he’s required to jump from the gates to the stewards’ satisfaction after throwing McDonald at the start in a trial last Monday.

“It’s far from ideal but you’ve got to work them somewhere, if he wasn’t trialling he would have been having a pretty solid gallop,’’ Waller said.

“He’s done well and it’ll take my expertise out and leave it up to the trial and James to sort him out.”

All eyes will be on Golden Slipper winner Farnan when he has an exhibition gallop between races at Randwick on Wednesday.

Co-trainer Adrian Bott said the colt has recovered from a minor leg injury which threatened his place in the TAB Everest just days after being selected by Aquis for the $15m race and will gallop with the stable’s leading Golden Eagle hope Dawn Passage.

“He looks good and he worked outstandingly this morning,’’ Bott said of Farnan.

Farnan will likely run in the Group 2 Roman Consul Stakes (1200m) on October 10 and then back up into the Everest a week later.

Adelaide trainer Gordon Richards will return to Sydney shortly to put the finishing touches on Gytrash’s TAB Everest preparation and he says a barrier trial on Monday will help shape the final couple of weeks before the $15m pinnacle.

Gytrash, who announced himself as a serious contender with a brilliant Concorde Stakes win over Nature Strip, spent 12 days at Aquagait near Menangle after his first-up win and returned to Clare Cunningham’s Warwick Farm base last week. 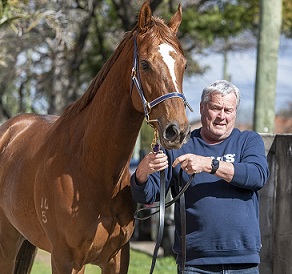 Richards said he’ll be guided by jockey Jason Collett’s assessment of the 1030m trial as to whether he trials again before October 17.

“If Jason says he’s a bit rusty we’ll give him another trial but there’s talk of giving him a gallop between races,’’ he said.

“He’s a clean-winded horse and provided he pulls up okay after the trial we’ll charge forward from there into the Everest.”

Since Gytrash’s Concorde win the TAB Everest picture has changed with Classique Legend announcing himself in The Shorts, the addition of Group 1 winners Tofane and Behemoth and Nature Strip’s barrier mishap that forced him to appear at Monday’s trial.

Richards is clearly enjoying the fact he has a cheap horse, with Gytrash costing just $40,000, in a $15m race alongside a few other inexpensive purchases.

“The people who bought the spots have the money and they’re picking the best horse for their spot,’’ he said.

“It’s good for the industry as a whole to think you can pay $6000 for one (like Behemoth) and if it’s good enough end up in an Everest. It brings paupers up on even par with blokes who have millions.’’

The five-year-old races in the Inglis slot and is a $6 chance with TAB.

Nash Rewrote The Script And Freedman Loved It

It didn’t quite go to co-trainer Richard Freedman’s script but exciting grey Love Tap consolidated his place as the horse to beat in next month’s Spring Champion Stakes with a dominant Rosehill win on Satutrday.

Much to Freedman’s surprise, jockey Nash Rawiller took Love Tap to the lead and from there he always looked in control. 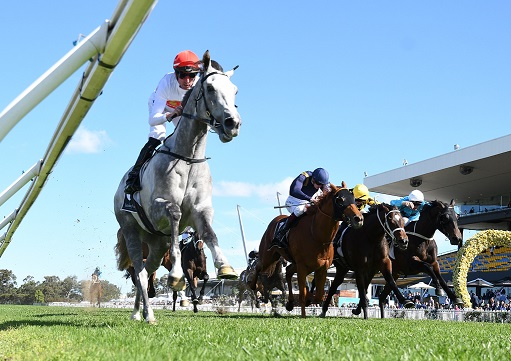 “I said to Nash ‘don’t let the leaders get too far away’ so he might have taken that a bit literally.

“But I was happy to see him out there, I knew they’d have to run some good sectionals to run over him.”

Punter’s Intelligence sectionals show Rawiller had the race in hand early, while he clocked the fastest first 800m he progressively slowed them to the point between the 1000m and 800m he ran 12.89.

He then upped the tempo gradually before putting the foot down at the 600m and increased the tempo by six lengths compared to the previous 200m. His last 600m of 34.63 was the fourth best and moree than enough to see him home easily.

“It certainly wasn’t the plan to lead but I was very happy to take it up and get him into his own rhythm. Ride him like the horse I think he is,” Rawiller said.

“He got into a beautiful rhythm down the back there and when a bit of pressure came on about the 700m he was straight there for it to quicken.

“He got a little bit lost late, he was sort of waiting for them a little bit, but I love the way he came again for me on the post when I really asked him.”

While Love Tap’s Spring Champion program is on track, trainer John O’Shea has to revert to plan B for Lion’s Roar after an allergic reaction forced his scratching from the Gloaming.

O’Shea said there is an 1850m benchmark race at Newcastle next Saturday that is an option to get Lion’s Roar to Randwick for October 10.

Keith Dryden is toying with the idea of using the Group 2 Premiere Stakes next Saturday as Handle The Truth’s major lead up for his Kosciuszko defence.

The five-year-old will be nominated for the Premiere against the likes of Nature Strip and Classique Legend while his other option is a Benchmark 88 over the 1200m.

That’s the same race Handle The Truth resumed in 12 months ago, he finished fifth before winning the Kosciuszko so Dryden said making the right choice is important.

“He’s on track, we haven’t changed anything this preparation,’’ he said.

“I’d like to see him a bit better in the coat but in saying that it has been very cold at home.

“He’s working well, he’ll gallop on Monday and then I’ll make up my mind. I wouldn’t like to flatten him with a hard run first-up.

“He’s in the Premiere and we’ll have a good look at everything.”

Handle The Truth is at $9 in TAB’s Kosciuszko market, if Dryden selects the Premiere it’ll be a mini-Kosciuszko trial with Donna Scott’s Lord Von Costa ($26) also expected to use the race as a first-up run.

If Dryden runs in the Benchmark 88 he’s expecting to receive around 63kg or 63.5kg so has apprentice Tom Sherry on stand by to ride in that race and remove 3kg.

Trainer Joe Pride is marking the end of an era in his stable with the retirement of Ball Of Muscle – the “last of the brothers” - announced on Saturday.

Ball Of Muscle has been a staple of Pride’s stable and holds a special place being a half-brother to stablemates and Group 1 winners Terravista and Tiger Tees and a smart sprinter in his own right.

Pride said there was consideration given to the 10-year-old having one more run in Melbourne but under the circumstances it wasn’t the right way to send him off.

“We possibly could have pushed it for one more but none of the owners could be there, I can’t go down and staff can’t go down,’’ he said.

“Obviously some horses finish up through injury but when they get to his age you finish them up when you think it’s time.”

Ball Of Muscle had 47 starts for 13 wins and was in the placings another 20 times, earning over $1.8 million.

1/3. The time has come to retire Ball Of Muscle. Today we celebrate his terrific career that has spanned 8 consecutive seasons including 17 interstate trips. He has defeated Australia’s best sprinters including Redzel, Brave Smash, Gytrash & Santa Ana Lane. pic.twitter.com/FOgzMBIIsH

He was a multiple Group 2 winner and ran Buffering to half a length in the 2015 Moir Stakes, his closest finish at Group 1 level.

Pride said he retires a sound horse and a post-racing career is in the process of being secured.

“He wasn’t as brilliant as his big brother Terravista but he’s super tough, super reliable,’’ he said.

“He was so fast, blistering speed, even up to his second last start where he led Nature Strip and did it quite easily.”

Meanwhile, the Warwick Farm trainer said he’s hopeful Eduardo can secure a TAB Everest slot on the back of his game second in The Shorts.

All the results and replays from Saturday's Rosehill meeting