Waller Has "Two Weeks To Turn Around" Nature Strip

Controlled speed is Nature Strip's weapon but it was a whirlwind early sectional that brought him undone, and cost him TAB Everest favouritism, at Royal Randwick on Saturday.

That was trainer Chris Waller's assessment after Nature Strip faded to run fourth behind Libertini in the Group 2 $500,000 Premiere Stakes (1200m) but he's confident he can turn things around.

Punter's Intelligence sectional data revealed, to find the lead, Nature Strip ran 9.97 between the 1000m and 800m and as a result he was a spent force not long after straightening.

"He went one to two lengths below his best and we have two weeks to turn it around. He'll be fine,'' Waller said.

“It won’t be easy but he has had a tough run today.

“I can’t fault the horse, his soundness is good, but when they are breaking 10 seconds for the first couple of furlongs they just can’t do it."

Waller said the Premiere was run a lot quicker than anyone expected and likened it to Nature Strip's fourth placing in the Lightning Stakes earlier this year prior to his runaway TJ Smith win in April.

Further to Waller's post-race view, it was revealed an endoscopic examination of the gelding showed a degree of mucus in his trachea which might also explain the performance.

Nature Strip will be given anti-biotics to treat the condition.

All of a sudden, after Nature Strip looked to have a stranglehold on the TAB Everest six weeks ago, the race is looking up for grabs.

Scott Hoping To Have Last Laugh In The Kosciuszko

As far as last placings go, Albury trainer Donna Scott couldn't have been happier with Lord Von Costa's performance in the Premiere Stakes which served as his major lead up to the $1.3m The Kosciusko (1200m) on Everest Day.

Scott said she came to Randwick hoping to finish around 10 lengths from the winner and that's what the eight-year-old did.

"He was tracking the winner into the race then Blaike (McDougall) said he blew out that last bit, which didn't surprise us one bit,'' she said.

"He's had a nice blow, you would expect him to with the speed they went. We'll come back in a fortnight, I'm not sure they'll run that time in the Kosciuszko."

Lord Von Costa is a $21 chance in the Kosciuszko and Scott said she will likely bring the horse to Sydney a little earlier in the week leading up to the race.

"We'll tick him over, he will have another good gallop the week before,'' she said.

"He doesn't have to do too much now, I'm sure that's cleaned his pipes out well and truly."

Reigning Kosciuszko champ Handle The Truth was beaten less than two lengths as he finished a luckless sixth, shades of his run in the Benchmark 88 first-up a year ago, behind Athiri in his clean out for the country feature.

Maher Has a Gift Horse In Enthaar

An early clash between Saturday's impressive two-year-old winners in next month's $1m Golden Gift is looking unlikely but co-trainer Ciaron Maher is hoping to "set up" exciting filly Enthaar's season by tackling the race on November 7.

Shaquero handed Chris Waller his third Breeders' in the past four years but Waller said "it wouldn't be in my nature" to run the colt, who he sees as a future Doncaster type, in the Golden Gift.

Maher came to Randwick with all the expectation on Enthaar's shoulders following her dazzling barrier trial win and she didn't disappoint.

TAB firmed her to $9 favourite for the 2021 Golden Slipper and Maher said if she does well in the next week or two he'll aim to have her qualified via the Golden Gift. 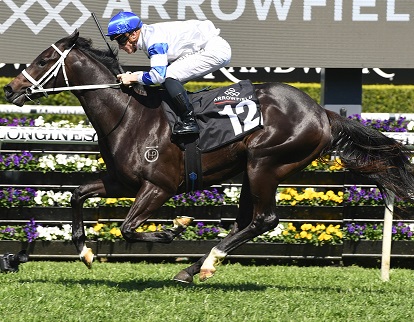 "Provided she comes through in the right order, she seems pretty straightforward, that would be a nice target,'' Maher said.

Maher doesn't have to look far for an answer to whether Enthaar is Golden Slipper material - he trained Away Game to run second in this year's Slipper and Loving Gaby to run fourth in 2019.

"She definitely has shown a lot more a lot earlier,'' he said.

"She had the runs on the board in terms of trials and jump outs."

Waller, meanwhile, said he would likely be patient with Shaquero who was educated at his Gold Coast base and is predicting a bright long term future for the colt.

"If you asked me which Group 1 race he was going to win I would say a Doncaster more than a Golden Slipper but who knows he might win one on the way through,” he said.

“Finding horses with ability, whether that be at the sales or on the racetrack, is one thing and looking after them is the other.”

Adkins' Recovery Ahead Of Schedule

Jockey Andrew Adkins was enjoying Epsom Day at Royal Randwick as he recovers from injuries sustained in a fall at Rosehill in July and he is happy to report things are looking up.

The 23-year-old is due to see his doctor in two weeks and it will be then that Adkins will have a clearer picture of a timeline to a return to the saddle.

"I might be anticipating to be back a lot sooner than what people think,'' Adkins said.

"Every day is an improvement, I'm training each day to build the muscle back up. I'm happy with the way things are going because I didn't think I'd be in this position.

"I feel like it is so much better than it could have been. And it's good to be able to get out and relieve some frustration from being home."

Epsom Handicap winning trainer Jamie Richards has some thinking to do about Probabeel's next spring target after the classy mare's stunning win in the $1m feature Randwick mile.

Probabeel overcame a wide gate and ran down her old foe Funstar to hand Richards and jockey Kerrin McEvoy their first Epsom wins and top off a huge day for the Kiwi trainer who also claimed a Group 1 at Hastings in NZ with Melody Belle. 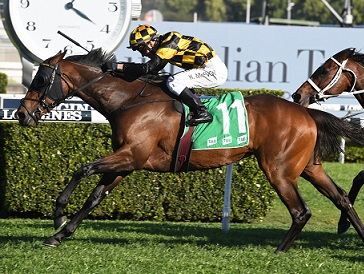 Richards said he'll give it a few days before deciding whether the $7.5m Golden Eagle (1500m) is the race that suits the four-year-old best.

“We have to think about the Cox Plate or the Golden Eagle for this mare,'' he said.

“We will see how she pulls up in the next couple of days, give her some time to get over this run, and I will have a talk with Kerrin but they are the options we need to consider."

Richards paid tribute to McEvoy's ride and the staff he's had in Sydney all spring overseeing a team of horses while staying home in New Zealand due to the pandemic.

“This is an unbelievable day – to win a Group 1 at Hastings and a Group 1 in Sydney,'' he said.

“We won two Group 1 races on the same day in Sydney earlier this year with Te Akau Shark in the Chipping Norton Stakes and Probabeel in the Surround Stakes but this would have to be right up there with my best days as a trainer.

“I haven’t been able to touch this mare or see her in the flesh for four months so all credit to my team in Sydney, they have done a great job."

Probabeel is on the $9 line in Golden Eagle betting alongside Bivouac and Funstar.

Trainer James Cummings is under no illusions about what faces emerging four-year-old Criaderas when he takes on the likes of Alligator Blood and Dawn Passage in the $500,000 Silver Eagle (1300m) next Saturday.

The first three placegetters are exempt from ballot into the $7.5m Golden Eagle (1500m) at Rosehill on October 31 and Criaderas, with a 73 rating, will need that top three finish to warrant Cummings pressing on.

"It's one of the attractions of that format, it gets form horses into the race,'' Cummings said.

"It'll be a really hard race so we will learn something about him."

Nobody missed the run of Criaderas as he scorched home from near last to run third behind Academy over 1400m at Randwick on September 19, running a 33.51 last 600m (Punter's Intelligence).

Cummings said Criaderas is a promising horse and concedes he's throwing him right in the deep end against the Golden Eagle favourite Alligator Blood who is set to make his Sydney debut.

"He ran home nicely and that's what he can do when he gets back in fields and does no work,'' he said.

"It's a different kettle of fish when you come up against the A graders."

No filly has won the Flight Stakes and Spring Champion Stakes double and trainer David Payne's gut feel is to give Montefilia the chance to etch her name in the history books next Saturday.

The Group 1 $500,000 Flight Stakes (1600m) was billed as a match between Dame Giselle and Hungry Heart but nobody told Montefilia as she ran the latter down in the shadows.

"Depending on how she pulls up we will back her up next week,'' Payne said.

"Then she will go to the paddock. She’s a laid back filly, she eats well, so she won’t have to do too much this week. We’ll just see how she is in the next few days.”

Only two fillies have beaten the boys to win the Spring Champion - Maid Of Heaven and Yankee Rose - but neither were able to win the Flight Stakes.

Payne was quite proud of Montefilia handing him a second Flight Stakes, following Unearthly in 2003, considering he only has 16 horses in work these days.

"It suits me having a small string now, I've done all I wanted to do, and I just enjoy winning big races,'' he said.

While Payne was all smiles, it was a case of wondering what might have been for Dame Giselle who was chasing the Princess Series clean sweep but she was badly held up on the fence at a vital stage and any chance she had was gone.

All the results and replays from Saturday's Royal Randwick meeting