Slipper Make Up Goes Down To The Wire

Godolphin may have final say on the make up of next week’s Golden Slipper after results on Saturday saw Arcaded and Chris Waller’s Shaquero sure up their spots in the $3.5m classic.

Waller had no hesitation in saying Shaquero will be taking his place but Cummings said he’ll be letting the dust settle before a call on Arcaded and Godolphin’s squad as a whole ahead of Tuesday's barrier draw.

Cummings has Anamoe, Ingratiating (who he said did enough in the Pago Pago in running fifth), Paulele and Arcaded in the top 16 but there was plenty of action post-race in the shape of potential late additions. 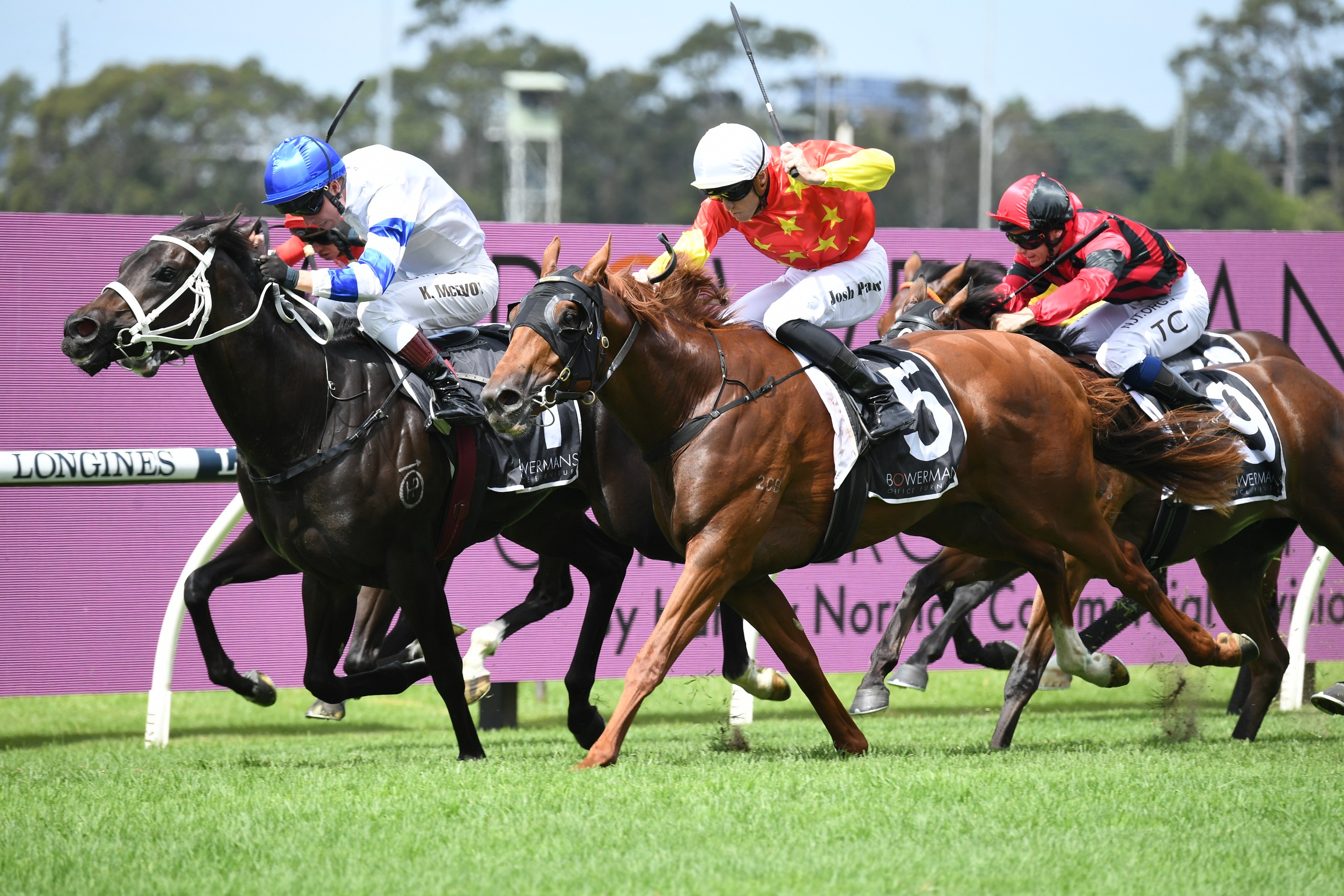 There could be a surprise New Zealand runner with Saturday’s Kiwi Group 1 winner Sword Of State booked on a plane pending he pulls up well from his Ellerslie win.

And connections of Black Opal runner-up Rocket Tiger are likely to pay the late entry fee to secure his place. This could leave Swift Witness and Captivant outside the final 16.

“I don’t think we should rule anything out, I think we give ourselves the opportunity to reflect on the rating,’’ Cummings said after Arcaded’s Magic Night win.

“She’s beaten Jamaea and Robidira there nicely, drew away from them. They’re nice fillies but they haven’t proven to be the top echelon, so we’ve got that to weigh up.

“But realistically if Arcaded was a humble owner’s one horse in the stable, most likely the horse would be back out and running.”

The TAB market didn’t think a lot of the results of the Group 3 Magic Night and Pago Pago Stakes, with Arcaded firming to $17 and Shaquero to $21. Profiteer retains favouritism at $5.

From a time perspective Shaquero clocked 1:09.97 some two lengths faster than Arcaded’s 1:10.29 though the fillies sprinted home faster.

Waller will have Silver Slipper winner Home Affairs and Todman Stakes winner O’President alongside Shaquero as he chases his first Golden Slipper and the champion trainer feels there’s still improvement to come from the Pago Pago victor.

“He ran a week before (he won) the Magic Millions and he does pretty well in between runs,’’ Waller said.

“He needs to be kept up to the mark and he’ll be fitter again in seven days.”

“He’s a decent horse obviously and on a better track he’s a different type of horse.

Former UK galloper I Am Superman raced himself into contention for the Group 1 $3m The Star Doncaster - if the track is dry - after a strong second-up win in the Group 2 Hyland Race Colours Ajax Stakes (1500m).

The five-year-old arrived in Australia for the 2019 Golden Eagle with trainer Michael O'Callaghan and remained in Sydney joining the Peter and Paul Snowden stable.

I Am Superman is now exempt from ballot into the Doncaster, he firmed from $51 into $15 with TAB after the win, and co-trainer Paul Snowden said if Randwick is a soft 5 or better he'd be a realistic contender.

“We tried last year, we fell a little bit short (10th in the Doncaster Prelude),'' he said.

"But on top of the ground he’s a dynamite horse especially when he is ridden a little bit positive early and gets into that nice rhythm and he can sustain it. Up to a mile and light weight is certainly right up his alley.

“We thought they would run along a little bit early through the nature of the day, but that gets him into the Doncaster now so we’re very very happy.”

Beaten favourite Criaderas, who ran a disappointing seventh, will probably need to run in the Doncaster Prelude in two weeks if he is to make a last ditch bid to squeeze into the Doncaster field.

Waller Giving Import A Chance To Get His House In Order

Chris Waller plans to go ‘back to basics’ with Great House after the promising import’s disappointing fourth behind stablemate Welsh Legend in the Catanach’s Handicap (1900m) and that rules him out of the Sydney Cup.

An easing $2.50 favourite, Great House sweated up noticeably before the race and when Tommy Berry asked him to chime in from the home turn he was a spent force – though he did battle on to just miss third.

Waller said he’ll consider spelling the four-year-old or he could freshen him up and come back to a mile and let him hit the line.

“He’s using up his petrol before the race,’’ Waller said.

“We’ll get him back to basics, he’s still very young. He’s only just turned four, he was born very late in December (he was a December 28 foal).”

Berry was questioned by stewards over his vigour in the last 100m or so, given the close margin between third and fourth, but the jockey said Great House was well and truly beaten by then.

“He wasn’t making it easy for me, I wasn’t able to ride him out,’’ Berry said.

“He was running out of gas the last 100m, he was getting very tired and starting to shift ground.”

As for Welsh Legend, Waller said he’ll likely return to Plan A with the mare and back up in next Saturday’s Group 3 Epona Stakes (1900m).

The win was the mare’s third from 23 starts and her resolve late in the race was what impressed Waller.

“I thought at the turn ‘will she really have a go’ but she certainly did,’’ he said.

“Originally we were setting her for the Epona. She was running in the Aspiration last week and we pulled her out but she’ll probably back up in the Epona next week.”

Art Cadeau will ramp up his preparation for the $500,000 Newhaven Park Country Championships Final (1400m) with a barrier trial hitout at Warwick Farm on Friday.

The four-year-old is the clear $4.50 favourite with TAB for the April 3 country feature on the back of his win in the South East Qualifier, run at Goulburn a month ago.

Trainer Terry Robinson said Art Cadeau spent a week at his owner's property in Berry after his Goulburn win, where he defeated Leg Work, and is happy with where the horse is at with three weeks until the Final.

"He seems well, he looks to be on track for the Championships,'' Robinson said.

"At this stage he's going to Warwick Farm on Friday for a trial over 1200m, Tommy Berry can ride him and that will be his main hit out."

Twelve horses have booked their spots in the Newhaven Park Country Championships Final so just two Qualifiers remain - at Coonamble on Sunday for the Western District then the Wild Card at Muswellbrook on March 21.

The $50,000 Wild Card (1280m) is set to feature the likes of Healing Hands and Rothenburg, both placed third in their respective Qualifiers, Brett Cavanough's Tamworth scratchings Fender and Dubai Tycoon, plus stablemate Eiger, while Sam Kavanagh hopes last Sunday's impressive Tamworth winner More Sundays can make the field after being balloted from the Hunter & North West heat.

Colette's Destiny Chosen For Her At Sky High Start

Jockey Rachel King put Colette's unplaced effort as an odds-on favourite in the Group 3 Bisley Workwear Sky High Stakes (2000m) down to the track surface but her cause wasn't helped by interference at the start.

The head on stewards vision showed The Chosen One, drawn to King's outside, hampered Colette at the start and caused her to step away slowly.

"He jumped straight into my line,'' King told stewards after the race.

"I think the track is a bit firm for her, she wasn't travelling as well the whole way, if she had jumped well I don't know if I would have been able to hold a spot. 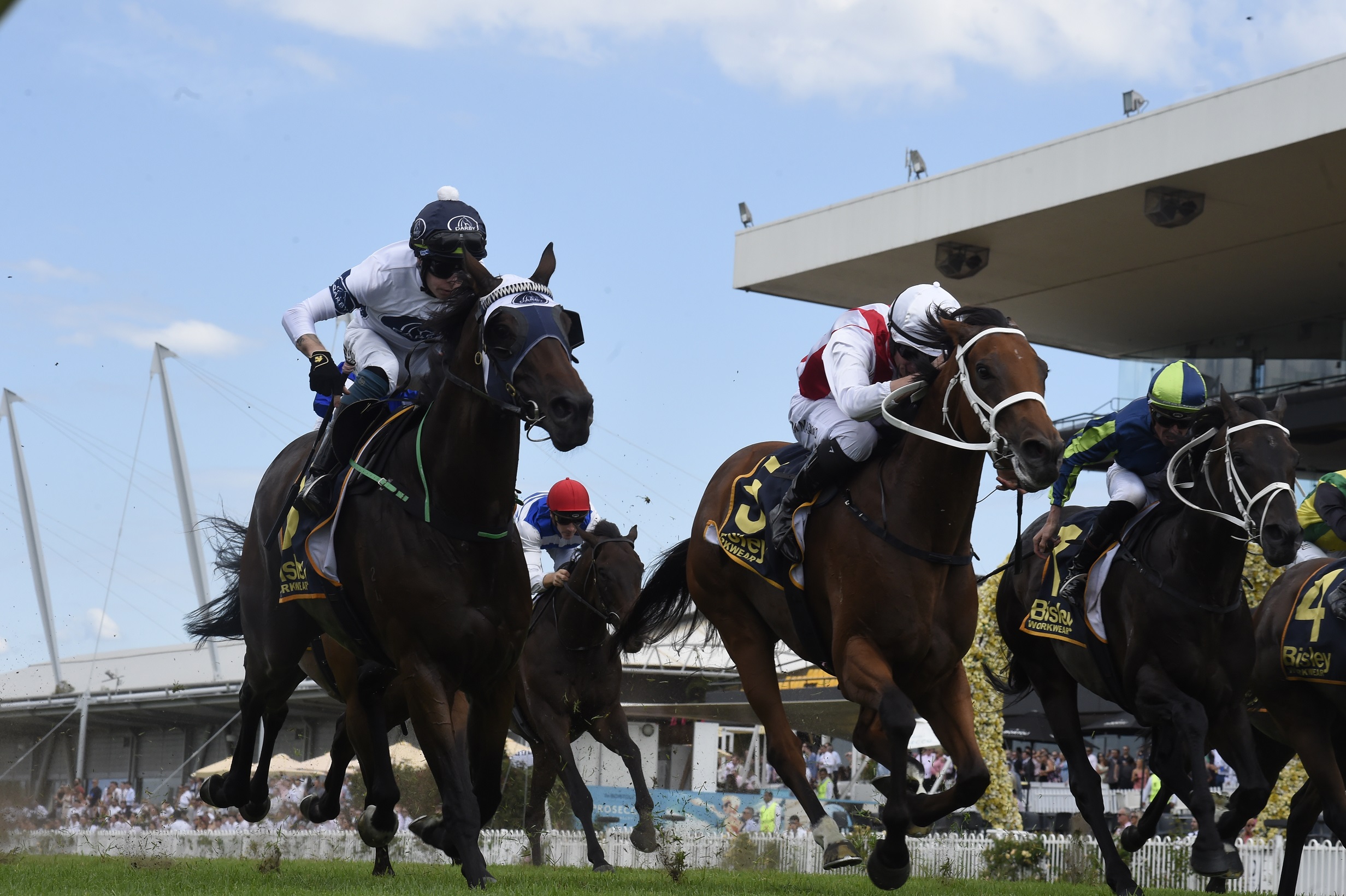 "She appreciates the give in the track as her results show."

Godolphin now has a decision to make on Colette's next step - naturally a wet track may influence any decision, with the mare holding entries for the Star Doncaster Mile, Sydney Cup, Queen Elizebeth and Coolmore Legacy during The Star Championships.

"Down the back I thought if he doesn't run well it won't be anyone's fault bar the horse. My fear was the last little bit he might just need it and he did."