What You Missed - Apollo Stakes Day

Cellsabeel Stablemate Shines In Gallop
Golden Slipper favourite Cellsabeel had a spin around Randwick in an exhibition gallop to tune up for next Saturday's G2 Silver Slipper Stakes (1100m) but jot down the name 'Etana' for next week at Rosehill too.

Tommy Berry and Cellsabeel edged out the stablemate but it was a sharp piece of work from the work partner.

"(Cellsabeel) was working with a partner that was very sharp and in good form, I'm riding her next week too so I'm pretty confident about her chances," said Berry.

"I'm really happy with the filly, she's come along well, she'll benefit from the run which is a good thing because it's obviously not her grand final."

Etana, a last start winner on Magic Millions day, will run in the Listed Parramatta Cup (1900m) setting up a clash with Shared Ambition.

Dame Giselle Grounded In Lonhro
What do we do with Dame Giselle after she was rolled at $1.65 in the Listed Darley Lonhro Plate (1000m)?

There are three factors that suggest she is worth forgiving.

Peter and Paul Snowden already qualified the filly for the Golden Slipper winning the rich Golden Gift so she'd have a stack of improvement, the stable have a history of this pattern with their gun two-year-olds (think Sepoy and Capitalist) and it was her first try on wet ground.

"She ran well," reported Tommy Berry, "The soft surface sapped her brilliance late. I thought I’d be winning on the turn but when I let her off the bridle she felt like she struggled in the conditions."

TAB didn't move her Golden Slipper price one way or the other after the defeat, keeping her safe at $11. Probably a fair reflection of her standing.

Flit Fires In Light Fingers
What is Flit's best trip?

James Cummings committed the filly to the G1 Surround Stakes (1400m) next start but was reluctant to tie plans down thereafter. 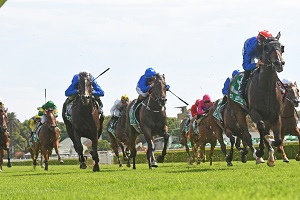 Flit, with the blinkers on for the first time, settled in behind the speed before pealing off their backs and exploding clear. Punters Intelligence show she clocked 11.92s for her last 200m, with the second placed Lyre clocking the fastest at 11.91s.

Last campaign Flit was brilliant in closing behind Libertini first up over 1200m. She went on to win the Thousand Guineas but was far from dominant over the mile.

"It's great to see her beginning to deliver and I dare say she'll be the filly to beat in two weeks' time," said James Cummings.

"We have a very firm idea of where she might head but we'll get through the Surround first and continue to feel our way without becoming to rigid in our plan. She just looks tougher this preparation, she is really developing."

Two For The Future
Don't be too dirty on Cascadian or Attorney failing to win first up. They've both got big roles to play over the autumn.

Cascadian paraded a lot better than last campaign, with the import acclimatised in his new surrounds, and after looming to run past Special Reward, he topped on his run 75m from home.

Remember, Cascadian ran third to Fierce Impact last campaign in a Group One when out to the mile. Glen Boss has already hitched his wagon to the flashy chestnut with an eye on the Doncaster.

"It was a good return," said Boss, "I think he has a good race in him this horse, with no weight he'll get into a handicap and run terrific."

As for Attorney, he couldn't keep up in the early and middle stages before producing the fastest last 200m of the race (11.94s).

"It was good for further," said Jay Ford, "But he found them way too sharp. He was under riding from the start, I was happy with the way he closed late but found the mile way too short."

Cascadian kicks off his autumn at @royalrandwick!

Check out the results and replays for Apollo Stakes Day at Randwick.