As they wandered up the tunnel to the Theatre Of The Horse for Winx’s famous final curtain call, Chris Waller said something to Pat Webster that might come back to haunt him this Saturday. 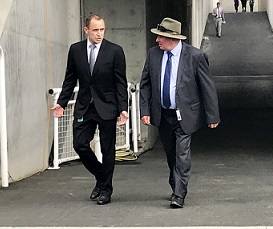 Trainers Chris Waller and Pat Webster entering the Theatre Of The Horse at Randwick.

Strangely, given the farewell that was about to unfold, the two trainers were talking about this Saturday's Group 1 $500,000 Winx Stakes (1400m) which would be run for the first time since 2015 without the great mare.

Webster, of course, trains Winx’s favourite pursuer Happy Clapper and the discussion centred on how fitting it would be for Happy Clapper to win the race and continue the Winx legacy.

“I get on really well with Chris, there’s been a lot of banter over the years,’’ Webster said.

“It was pretty special just to be part of the whole thing.

“He said on that day 'just come back and try to win the Winx'. Well he might have different thoughts now, he’d like to win it himself I’m sure.’’

Waller won’t be lacking representation in the season’s first Group 1 race with a trio of classy Group 1 winning mares Verry Elleegant, Unforgotten and Youngstar plus new recruit Kings Will Dream on the comeback from injury.

Happy Clapper has famously run second four times to Winx at Group 1 level, plus he started the autumn with a second behind her again in the Group 2 Apollo Stakes over the Randwick 1400m, and of course he hasn’t raced since that fourth in the Queen Elizabeth.

He does have Winx’s jockey on his side, though, with Hugh Bowman jumping on board attempting to win the race for the fifth successive year - the past three on Winx plus Royal Descent in 2015.

Webster admits the nine-year-old’s most recent trial, where he ran sixth of seven behind Baller, doesn’t look that great but knows the horse better than anyone so he’s not going to start doubting now.

“On face value his trial was a bit disappointing but it was only a trial and as my wife said on the way home, ‘the way you train you want him fit on the 24th not the 12th’ ,’’ he said.

“We’ll be there and we know Clapper’s form over 1400m first-up and we know he loves Randwick.

“I’m well aware he is nine and getting on. It’s like going out for a game of footy, the 20 year old blokes have got to have it on the 34 year olds.

“There’s always something bobbing its head up to have a go at you.’’

Webster gave Happy Clapper his final gallop on the Kensington track on Monday and reported he’s eaten up in the days since and looks a picture.

He’ll follow his usual pattern of being floated the 800m from his stable to the course, Webster does that to switch him on for race day and sees no reason to change that part of his life.

It’s now really up to whether the nine-year-old Clapper can fend off the juniors and as a $4.80 chance early his record is being respected by TAB.

“He’s up there now and they have to prove themselves against him,’’ he said.

“If he disappoints you know that age is getting to him, which is going to happen one day.

“He has shown no signs of it soundness wise and we are just happy to still be part of it. He’ll perform.’’

Wonder what Chris Waller and Pat Webster will talk about as they head up the tunnel this time?