Webster Happy To Clap On The Champ

Pat Webster is asked more about Winx than he is about Happy Clapper. 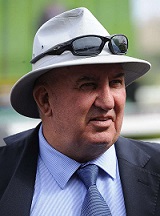 He understands why, no horse has mixed it with the champ more than Webster’s pride and joy who has his ninth rumble with Winx in the Group 2 $250,000 The Star Sydney Apollo Stakes (1400m) at Randwick on Saturday.

So what is the question Wesbster is asked most often?

“Always something to do with Winx – like, do you realise without Winx he would have been a champion of his area,’’ he said.

“But there is a Winx and she is the champion of her era. He’s earned $6.3m and I still pinch myself. Winx is Winx but that’s just bad luck.’’

Webster is more than happy to talk about Happy Clapper and what he’s capable of aside from the well publicised stoushes with Winx.

For the record he feels the eight-year-old is best suited to a mile, though he’s proven capable at 2000m without winning, and is as proud of the Clapper as he could possibly be.

“He loves Randwick which is good for me because I love Randwick,’’ Webster said.

“He’s the only horse in history to win the Villiers, Epsom and Doncaster and I was happy to win any of them.

“The Doncaster was special. To have a horse that loves a mile and loves Randwick it doesn’t get any better than that.’’

Webster would have loved for Blake Shinn to continue his association on Saturday – through injury and more recently suspension the pair haven’t combined since that famous Doncaster win last year.

But he described stand-in jockey Sam Clipperton as a Blake Shinn mark II given their similar riding styles.

Happy Clapper’s spring was cut short after two starts when he bled in the Makybe Diva Stakes yet was still only beaten about three lengths.

Happy Clapper wins his trial at Randwick on February 7

But he looked every bit the best version of himself winning a barrier trial on the Kensington track on February 7 and has a very good first-up record including victory in the Group 1 Canterbury Stakes last autumn.

“I don’t usually do that much with him in a trial but I was going 1400m first-up and I didn’t want to do anything this week with him other than pacework,’’ he said.

To be frank, Webster expects to run second on Saturday.

Most people have that expectation too – on Wednesday he was $9 second elect with TAB behind Winx ($1.08) – but has Webster entertained the unthinkable happening?

“I’ve thought about it. You’re not going to feel bad because he’s your horse and you love him,’’ he said.

“But then again you wouldn’t feel good. She’s there to be beaten but the trouble is you’ve got to find something to beat her.’’