The TAB Everest and now the inaugural Iron Jack Golden Eagle (1500m) – is there anything Chris Waller and Glen Boss can’t do?

The dynamic duo were at it again adding the $7.5m Golden Eagle to the $14 million TAB Everest two weeks ago as Epsom Handicap winner Kolding pounced on early leader Sunlight to claim Australia’s third richest race. 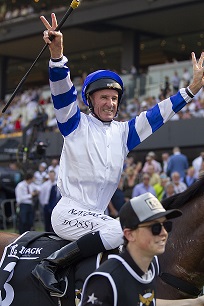 An emotional trainer Chris Waller, a proud resident of Sydney’s west, predicted Kolding is only just getting started too having backed up his Group 1 Epsom Handicap win with Saturday’s success on his home track.

“What a thrill. He looked as if he was going to be very unlucky, he was like a pinball machine up the straight,’’ Waller said.

“When he got out I thought ‘oh no the winning post is going to come up a bit quick’ but he’s a great horse, he had to lift and he was very impressive.

“He certainly is (underrated). Forget his first runs, the second half of his career has been something else.

“He hasn’t finished yet. You can’t come back for another Golden Eagle but maybe he’ll be there for a Queen Elizabeth, who knows?”

Kolding settled midfield on the fence and Boss was forced to ride for a bit of luck as the field bunched around the turn.

Just as Sunlight looked to be holding her rivals, Doncaster winner Brutal dropped off from in front of Kolding and Boss drove him through.

Waller’s other runner Arcadia Queen had a hard luck story in running fifth. The WA mare was racing outside Kolding when she almost fell about 700m out and became fired up after the incident.

For her to loom up as a chance in the straight then finish fifth was a gallant effort.

Boss can’t believe his luck having elected to move back to Sydney from a few years in Singapore and in the space of 14 days has won the two richest races in Sydney.

“I am dreaming right now. If you’d said this to me six months, of course you would have laughed,’’ Boss said.

“I have this horse to thank. Without these beautiful specimens of animals the athletes that they are, I wouldn’t be able to these sorts of things.

“I’m privileged to be part of Team Waller, Neville Morgan’s family and this horse because he’s a serious animal. He’s a gelding so he’ll be here for a long time - we’re gonna have some fun.”

The champion jockey said he wondered if a gap was going to be open but he knew if one did Kolding had the engine to take advantage and that’s how it unfolded.

“When I got the split at the furlong I knew I was home because he hadn’t done any work. He’d been held up most of the race,’’ he said.

“He’s got a very good turn of speed this horse. It was tight and he was willing - wow!”

The National Jockeys Trust was the selected charity by the connections of Kolding so they receive $410,000 while Dementia Australia has $150,000 coming its way through runner-up Sunlight.

Co-trainer Calvin McEvoy said the stable felt vindicated in stretching the mare out to the 1500m and that her performance opens up plenty of options for the autumn carnival.

“The mare has had a bit of undeserved scrutiny after and okay run in the Everest but below par,’’ McEvoy said.

“She proved today she is gutsy and a real champion. Unfortunately that import (I Am Superman) put the pressure on before the turn, Luke (Currie) felt if that had have happened she could have really kicked.

“It shows how good dad’s judgment is, we had a lot of people saying don’t do this and don’t do that and it nearly came off.’’