Vinco A Chance For Sherry To Shine At Hawkesbury

Trainer Mark Newnham had no hesitation in retaining his new Irish apprentice Tom Sherry to ride Aeecee Vinco at Hawkesbury on Wednesday but that’s as close as he’s getting to metropolitan racing for the time being. 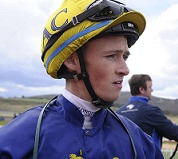 Sherry, 21, rode his first Australian winner on Aeecee Vinco at Goulburn recently and will follow the same blueprint Newnham used with champion apprentice Robbie Dolan in the next 12-18 months.

That means he’ll be given a good grounding in the country and provincial regions before he’s asked to step up.

“He’s got the talent but he is still a 3kg claiming apprentice,’’ Newnham said.

“It will take him a little while to work through those little errors and adjustments he needs to make but that’s why he gets 3kg.

“I said to them both the other day, as Tom was ready to kick off, that he’s got Robbie to thank for setting a platform for him not just in the way he rides but the way he’s conducted himself.

“He’s laid the platform, Tom just needs to follow the same path and he will have the same success.

“Robbie is a good, hard working young man who has achieved a lot in a short time, he’s very respectful to people when he’s off the horse and gives good feedback after a race.’’

Sherry, who has four wins from 24 rides in Australia, partners Aeecee Vinco ($4.40 with TAB) in his trackwork and he had an armchair ride on the three-year-old to win a Class 1 at Goulburn on October 8.

The colt will benefit from the 3kg claim when he steps up in class in the TAB Handicap (1000m) and Newnham said there’s enough talent in horse and rider to get the job done again.

“It was a good opportunity to put Tom on a horse that could win and take advantage of the claim,’’ he said.

“He has come on well since the win so I’d expect he will be hard to beat. He’ll get up on pace, he won with a bit in hand the other day.

“It’s a little rise in grade but he’s a bit fitter and his coat has come on again since then too.’’

Don’t be surprised if there’s a change in race pattern for promising filly Super Oasis in the ILG Handicap (1100m) now she has proven to Newnham she can settle in her races.

The filly had a month between runs before finishing a close sixth at Kensington on October 9.

“She’s got the talent but it’s been a matter of working out her manageability through the race,’’ he said.

“The other day we made a couple of gear changes and she raced a lot truer, settled well, so we are on the right path.

“I wouldn’t be scared to put her into the race now where previously if you’d have asked a little bit out of the gates she would have over raced and not finished off.’’

Newnham’s third runner at Hawkesbury, and the shortest priced, is Proven Class ($2.70) who steps up in trip in the Pink Finss Handicap (2000m) after placings at both runs back from a spell.

“She’s a good strong mare with a bit of a staying future and this looks to be the right race for her.’’

All the fields, form and replays for Wednesday's Hawkesbury meeting