Top 10 Moments Of The Championships

The Sydney Autumn carnival needed a 'grand final - enter The Championships. Now heading into its sixth year, having first been run in 2014, it's the perfect time to look back on the best the two-day event has provided.

Here are Brad Gray's Top 10 highlights from The Championships:

The day Chautauqua did the impossible. He was still last 250m out and under severe pressure from Tommy Berry. He spotted English about seven lengths. What the ‘Grey Flash’ did from there goes down as one of most exhilarating wins witnessed on a racetrack, ever. Berry concedes that this win, which was Chautauqua’s third straight TJ Smith Stakes, is the only one he doesn’t clearly recall. It’s all a blur. A whimsical, dreamy blur. “It was like everything was going in slow motion, it felt as if you were floating on air,” was how Berry described riding Chautauqua.

This was the win that convinced Chris Waller that Winx was a champion. Her ninth win in the streak was one of her greatest escapes. With the mare still back in 12th at the 800m and Hugh Bowman niggling at her to stay in touch, on a choppy Randwick track, Waller thought she was beaten. He was left wondering why he ran her in the race. A four-year-old mare with 56.5kg, Bowman also admitted it was the first time he has been worried when riding her. She was going nowhere. However, as champions do, she found a way and won by two lengths. Never in doubt… 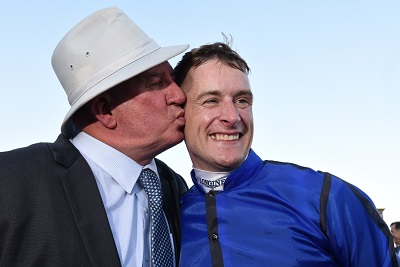 “Growing up as a kid and a young apprentice, the Doncaster was the race, not the Derby, not the Golden Slipper, not the Sydney Cup or the Epsom. It was the Doncaster,” Pat Webster beamed after Happy Clapper had won him the race he had always dreamed of winning. Having run second to Winx and It’s Somewhat the two year’s prior in the iconic mile feature, it was nothing more than the popular son of Teofilo deserved. Blake Shinn tucked Happy Clapper in behind the leaders before slipping up along the fence and scoring a dominant two length victory.

You couldn’t write the script for this. Who Shot Thebarman was having his fifth crack at the Sydney Cup and after two near misses, behind Grand Marshal in 2015 and Polarisation in 2017, the evergreen 10-year-old stuck his nose out to beat race outsider Zacada in the tightest of finishes. Blake Shinn recently reflected on the win saying, “He got his day in the sun and it was a just reward for an ultra-consistent horse. It was very special.” It’s amazing to think that ‘Bazza’, as he was known around Chris Waller’s Rosehill stable, didn’t race until he was nearly five, due to him being so unruly.

This was win number 17 in the streak for the mighty mare Winx, and Group One number 12. Unlike the Doncaster the year before, Hugh Bowman didn’t have a moment’s concern having settled her midfield, looming up to second before the turn and putting five lengths on her rivals. Hartnell was back in second and his jockey James Doyle, out from the UK for Godolphin, was left marvelling at Winx. “It was a devastating kick she produced and she left us for dead,” Doyle said.

6/ Grand Marshal and Who Shot Thebarman 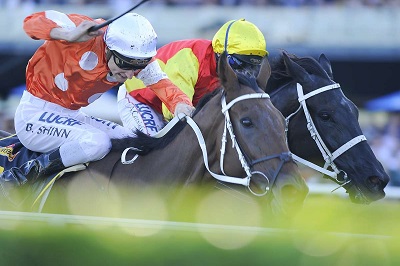 Grand Marshal (outside) and Who Shot Thebarman (Pic: Bradley Photos)

This was Jim Cassidy’s 104th Group One win and as it turned out, the champion jockey’s last before retiring. Who Shot Thebarman had the race shot to bits, he was home, only for the stablemate to nail him on the line. After a gruelling two miles, a nose separated the pair. Grand Marshal settled last and having started $41 after a fair lead-up run in the Chairmans Handicap when third behind Tremec, the task looked insurmountable. Cassidy, at 52 years of age, drove him home in signature style getting every last ounce of energy from the stayer. Ringa-ding-ding. It was vintage Cassidy.

Chautauqua’s second TJ Smith Stakes win wasn’t quite as astonishing as his third, but it was still breathtaking. In typical Chautauqua style, he found himself a long last, and was still there at the 300m mark. That’s when the afterburners kicked in and he let rip down the middle of the Randwick track to win running away. Racecaller Darren Flindell famously bellowed “Boom!” as Chautauqua swallowed up Fell Swoop and English. Chautauqua’s greatness doesn’t come from how quickly he can sprint, but rather how freakishly long he can sustain his top speed.

This was one of the most dominant wins we’ve ever seen in a classic staying feature. Lasqueti Spirit charged along out in front making it a true test of stamina and Bonneval came into her own under a beautifully timed ride from Hugh Bowman to put 4.5 lengths on her nearest rival. Bowman told media after the win, “I could enjoy the ride with everyone else the last few strides.” It was a devastating display. A week earlier NZ trainer Murray Baker saw Jon Snow take out the ATC Derby. You have to go back to 1980 to find a trainer who has won the ATC Oaks and ATC Derby with two different horses. 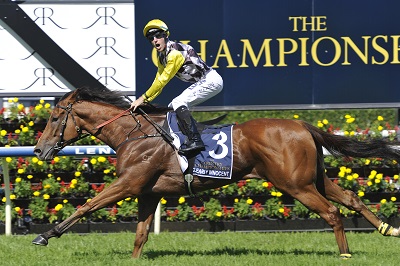 Easy as you like for Clearly Innocent (Pic: Bradley Photos)

Launched in 2015, The Country Championships has proved a resounding success. Joining Clearly Innocent on the honour roll is Artlee, Free Standing and Victorem. What made the victory of Clearly Innocent so memorable, outside of his dominance, was that he was under an injury cloud on race eve. Trainer Greg Bennett revealed that he and his staff worked into the night to treat a stone bruise. With bar plates applied to both front hooves, Clearly Innocent was unwanted by punters drifting from $2.30, having been so impressive in his lead ins, to start $5.50. It made no difference and his class shone through.

What a battle this was. The two three-year-olds paired off to duke it out. After Levendi peeled off Ace High’s back the duo locked horns from the 200m home and the bob of the heads went the way of Levendi. The passion of the Galegotis stables bubbled over at Randwick with wild celebrations breaking out when Levendi’s number finally went into the frame. It wasn’t over yet though with Levendi having to survive a protest for alleged interference over the final 100m. It denied Ace High making history, as he’d have become the first ever Victoria Derby/ATC Derby winner.

Check out the fields and form for Day 1 of The Championships at Royal Randwick.