Jockey Damien Thornton doesn’t like to get too bullish leading into to Group 1 races but he can’t wait to get to Randwick on Saturday to chase a major on talented stayer Realm Of Flowers. 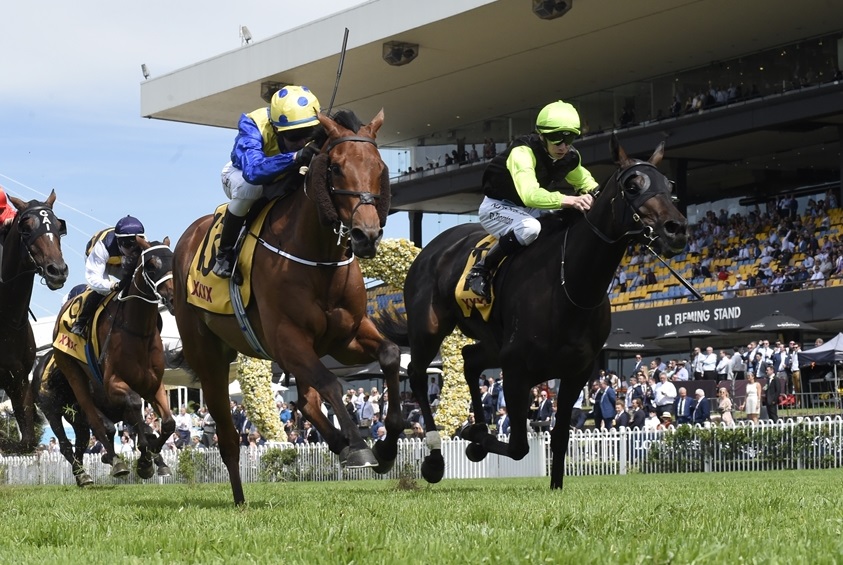 This is the mare, trained by Anthony and Sam Freedman, who tracked wide throughout before charging into second place in the Manion Cup (2400m) at Rosehill last month catching everyone’s eye from a Group 1 $2m Schweppes Sydney Cup (3200m) perspective.

Punter’s Intelligence sectional data revealed Realm Of Flowers covered an extra 13.1m compared to the winner Favorite Moon so with even luck Thornton is adamant he can reverse the result and be the horse to beat in the Cup.

“The two miles will suit, hopefully we can get a bit better run this time and I don’t see why we can’t turn the tables,’’ Thornton said.

“She was strong at the finish of the Sandown Cup last spring so six months down the track from that race you’d think she’d be at least as strong or even stronger.

“She was always a big girl but she is just a lot stronger now. I didn’t get a chance to ride her last prep because I was injured but you definitely notice the difference.”

Thornton, who claimed his first Group 1 win on Toffee Tongue in the Schweppes Oaks last year, rode Realm Of Flowers to victory in the Group 3 SA Fillies Classic just under a year ago and the Manion Cup was his first ride on the mare since then.

He was a victim of circumstances in that race, despite drawing well he was unable to find cover as horses kicked up inside him and the mare was forced to race wide.

Given the extra distance it’s easy to argue she should have won that race but aside from that Thornton said it was an excellent Sydney Cup trial.

“It didn’t pan out, it left us stranded a bit but she still ran very well regardless,’’ he said.

“She found a good rhythm, even being stuck three deep, and kept going.

“It’s not the worst disadvantage these days being three deep the way some of our staying races can be run. They can go quite slow, maybe not so much in Sydney but down in Melbourne they do.

“She was comfortable enough where she was and found a rhythm and still hit the line.

“It’s hard to be confident because they are hard races to win but I am excited about it.”

Favorite Moon, $5.50 favourite with TAB on Wednesday, meets Realm Of Flowers ($6.50) 1kg worse for the 0.3 length defeat though he also drops in weight after the pair carried 53kg at Rosehill.

Trainer William Haggas’ travelling rep Isabella Paul said the lightly raced four-year-old has thrived at Canterbury since his most important win to date.

“We’ve tried to keep him really fresh and haven’t done too much with him,’’ she said.

“He ran so well the other day that you don’t want to fiddle around too much and change up too much. He did a piece of work with Kerrin (McEvoy) on board last week and he’s in great form.”

Prior to arriving in Sydney, Favorite Moon’s two wins had been at Haydock over 2816m and 2817m so Paul is confident two miles won’t be an issue.

She points out the horse’s sire, Sea The Moon, is well known for producing jumpers in the UK.

“He’ll definitely stay, his pedigree suggests he will stay, and his best trips at home have been over 2800m so I think the two miles will suit him nicely,’’ she said.

“I’d like him to jump and get some cover and take it from there. I think I’d like to see it run as close as possible to how the Manion was run.”

The Offer in 2014 is the last Manion Cup winner to train on and win the Sydney Cup.

All the fields, form and replays for Day 2 of The Star Championships at Royal Randwick on Saturday