James Cummings is prepared to let the dust settle on surprise winner Thermosphere as far as next week’s $3.5m Longines Golden Slipper is concerned but Ciaron Maher confirmed Prague will be one of up to four youngsters from his stable in the two-year-old classic.

Prior to the Group 3 Antler Luggage Magic Night Stakes (1200m) at Rosehill, Godolphin’s Slipper representation looked to rest with talented colt Hanseatic and Cummings, who had five runners in 2019 including the winner Kiamichi, with none. 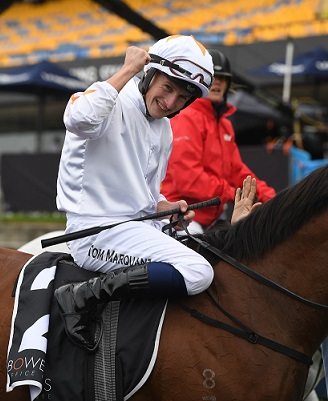 Kiamichi, of course, won the Magic Night before running away with the Slipper a week later.

Whether Thermosphere is given the chance to repeat Kiamichi’s double will be decided by Godolphin prior to Tuesday’s barrier draw and Cummings said she may well be granted that shot, mindful that it’s a wide open year.

“There’s a lot to be said for that but we'll put the filly first and do the right thing by her,’’ Cummings said.

“If she’s absolutely bouncing and ready to have a crack then we will do the sporting thing and give her a chance.’’

TAB slashed Thermosphere’s Golden Slipper price from $301 to $26 following the win while Prague, who was too strong in the Group 3 Bowermans Commercial Furniture Pago Pago Stakes (1200m), tightened from $26 into $15 with both exempt from the ballot.

Cummings said Thermosphere, who broke her maiden status at Newcastle on a heavy track on February 27, has the right credentials to be a Slipper contender.

“We thought she had a bit of ability last year and we like the way she’s come along, she’s kept improving and she has an excellent temperament,’’ he said.

“It was an excellent performance from her and a good ride from James (McDonald). As far as the Golden Slipper goes we’ll have a talk about it and get through the next two days.’’

UK jockey Tom Marquand, who arrived back in Sydney on Friday, has his Slipper ride sorted out after he guided Prague to his Pago Pago win.

It’s likely the Ciaron Maher and David Eustace stable will have three or four runners next Saturday with Prague to be joined by Magic Millions winner Away Game, Muntaseera and Black Opal placegetter Cellsabeel - if she makes the final 16.

Maher said the seven day back up will suit Prague who bounced back from being beaten as favourite in the Skyline Stakes two weeks ago.

“He’s a horse that has a fair bit more to offer,’’ Maher said.

“You can see him still switching the ears around and he is still quite progressive so I know there is a bit more in the tank and I think the back-up is ideal.’’

Marquand had Prague positioned outside the leader Postcode and the $1.6m colt responded to some hard riding and surged away.

“Clearly he has got an exceptional amount of ability,’’ Marquand said.

“He has still got untapped potential in the way that he went through the last couple of furlongs and he’s still not quite finished.

“He’s a lovely big horse and he’s not done an awful lot of racing so there is no reason why he shouldn’t handle backing up.”

The final field for the $3.5m Longines Golden Slipper (1200m) is declared at 9am on Tuesday.

All the results and replays from Rosehill on Saturday

She’s found wins a little hard to come by until recently but Irish Angel is ready to improve on her ...
Read More