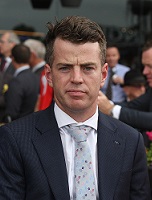 While historically a double figure barrier isn’t the difference between winning and losing a feature Randwick mile, Richards said it’s important the five-year-old can settle with a bit of cover so he can unleash his big finish.

Te Akau Shark, second favourite with TAB at $6, jumps from barrier 16, the same gate Secret Admirer won from in 2011, on Saturday.

“James (McDonald) doesn’t seem to be too worried about the mile start at Randwick, you can win from out there.

“He has to go back until he can get some cover, I’d like to be midfield if we could but if we’re going to be four deep punching the breeze we have to come back and get that cover.

“So we’re going to be relying on a decent tempo up front but with a full field that should happen.’’

One of the horses holding the key to the Epsom pace is top weight Dreamforce, who downed Te Akau Shark in the Tramway Stakes (1400m) on September 7 and jumps from the outside alley.

Punter’s Intelligence data out of Te Akau Shark’s Australian debut second in the Tramway shows why his effort was so notable.

Richards concedes the Epsom is Te Akau Shark’s biggest test but is sure he’s had a perfect preparation and the Tramway run proved he is up to it.

“It was a really nice run, he had another horse outside us lay over us a bit trying to push us back to the fence,’’ he said.

“I always think that has a bearing on how they quicken. So long as James can get him a nice run in the race I’m sure the horse will be competitive.

“He enjoys his races being spaced, that gallop the other day at Canterbury bought him on.

“It’s a good rendition of the race and he’s going as good as we can have him. It’s never easy to win Group 1s and it’s going to be a really good challenge.’’

The pair hit the line together in the Tea Rose at 1400m two weeks ago and Richards said the mile plays in his filly’s favour.

“Her preparation has gone pretty well, it was a nice run first-up, better second-up, and hopefully she is going to improve into her third-up run,’’ he said.

“She’s going to be strong and run out the mile well and we’re quietly confident she’ll run a big race.’’

Richards said he’s not placing any emphasis on a so-called match race and is banking on Kerrin McEvoy getting it right in the run in the small field.

“I don’t think we’ll be getting too worried how the race is going to play out,’’ he said.

“We’re going to be back but hopefully get on the back of the right horse and improve into the race.

“The six runners means she’s hopefully going to be a little bit closer to them.’’