There's a sense of something to prove in the Santa Ana Lane camp as the ruling favourite for the $14m TAB Everest begins his path to Australia's richest race.

The six-year-old has been back in the Freedman yard for about a week on a slow build up with assistant trainer Sam Freedman saying time is on his side to improve on his sixth placing in 2018.

Despite being a five-time Group 1 winner, and twice since last year's Everest, his defeat last spring has the fires burning within the Anthony Freedman stable to be declared the undisputed number one sprinter in Australia.

"We're pretty certain he is the best,'' Sam Freedman said.

"When he gets the right pace and a fair track, a genuinely run race, there isn't a better sprinter in the country.

"He's shown that in the VRC Sprint and TJ Smith. So if the track isn't like it was last year we'd hope he would show he is the best sprinter out there.''

Santa Ana Lane, who races in the TAB slot this year and is the $5 favourite, followed his TJ Smith win with an unplaced but eye-catching effort in the Chairman's Sprint Prize in Hong Kong at the end of April.

Freedman said the plan for Santa Ana Lane is not locked in as yet though it's expected he'll tackle The Everest with either one or two runs under his belt.

"The Hong Kong trip hasn't hurt him at all, when he came back in we were looking to make sure his characteristics are as they normally are,'' he said.

"We have plenty of time until The Everest. He has a couple of weeks of cantering then we'll build up with pace work and he's about six weeks off a trial.''

Meanwhile, there's also an air of confidence in the Tony McEvoy stable that Sunlight can challenge for that title of the nation's best sprinter in the new season.

Assistant trainer Calvin McEvoy said the rising four-year-old now looks like a "proper racehorse'' which is an ominous sign given she won three Group 1s beating the three-year-old colts in the Coolmore Stud Stakes and older sprinters at handicap and weight-for-age level.

Sunlight ran third behind Santa Ana Lane in the TJ at her last appearance.

"She looks like she's fully matured now. Every time she came back she looked better and better but now she looks like a proper racehorse,'' McEvoy said.

"If she takes the steps we think she will she has to be one of the top sprinters in the country. 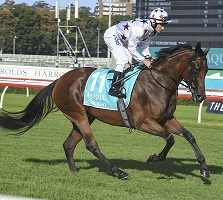 Sunlight has pleased the McEvoy stable in the early stages of her Everest prep. (Pic: Bradleys).

"Her attitude at the track is fantastic, she bowls out in the morning and struts her stuff. She knows she's good and that's a great quality to have.''

McEvoy said Sunlight will start pace work in the first week of July and as she takes a decent amount of work to get fit she will have at least two starts before The Everest, possibly three.

And there's a good chance she'll continue on to the inaugural $7.5 million The Golden Eagle (1500m) at Rosehill two weeks after the Everest.

"She's very robust and eats the house down and does well in training. We've learned she takes a bit more work than normal horses to get that fitness up,'' he said.

Sunlight, $9 with TAB, runs in the slot owned by the Max Whitby and Neil Werrett group.

There are just five slots remaining in this year's TAB Everest (1200m), run at Royal Randwick on October 19, after star WA filly Arcadia Queen and dual champion Redzel secured their places in the past week.