The inaugural Golden Eagle has its cult hero in the shape of the Tasmanian pocket rocket The Inevitable. 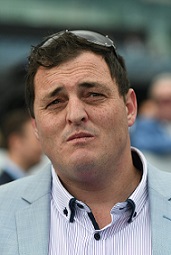 He weighs less than 400kg and is remarkably small but the gelding showed size doesn’t matter with a gutsy win in the $500,000 Silver Eagle (1300m) at Royal Randwick.

Trainer Scott Brunton said he can now dream about the $7.5 million Golden Eagle (1500m) run at Rosehill on November 2 with his place secured in the race exclusively for four-year-olds.

“He’s just a phenomenal racehorse, got a great will to win and a fantastic action,’’ Brunton said.

“It just goes to show it doesn’t matter what shape and size they come in if they move well and look right they can run.

“There’s a lot of water to go under the bridge and there’s some serious racehorses in the next one but we are grateful to be a part of it.’’

With his place in the Golden Eagle secured, The Inevitable is now a $9 chance with TAB while runner-up Fasika firmed to $13 behind WA mare Arcadia Queen ($3).

Brunton said The Inevitable’s diminutive stature was a sticky point for the first 12 months after he was purchased for $90,000 but he’s now revelling in his growing cult status.

He was the subject of plenty of offers from Hong Kong early in his career but the phone calls dried up when prospective buyers found out about his stature, or lack thereof.

The owners are now having the last laugh with his prizemoney now just shy of $700,000.

“They all stuck in and this has been a great result.

“He beat some good horses today. It’s very exciting to get this done.’’

Jockey Nash Rawiller was taken aback by The Inevitable’s will to win.

“For his size, his stride is twice as long as you expect it to be. He just covers the ground.”

Brunton, who worked for Grahame Begg at Randwick for almost a year as a teenager, said the Golden Eagle is still a dream but it’s one he’s happy to take on.

The Inevitable wins the Silver Eagle at Royal Randwick

And the manner in which The Inevitable wore down Fasika says to Brunton, while he faces a class test, he will try his heart out against the likes of Brutal, Arcadia Queen, Sunlight, Kolding and Classique Legend at Rosehill next month.

“We’re going against the real deal but as long as he acquitted himself well I’ll be over the moon,’’ he said.

“This is the way the horse normally wins his races.

“He was dominant last start but he normally just gets the job done so it was pleasing for me to see him back to that way.

“I have no doubt the second horse is pretty smart too. It’s just great to get the job done, it’s a long way to come to get beat.’’