A filly that has so much expected of her, a so far unrealised talent, a boom stayer, an emerging blueblood and of course the world’s best sprinter – you couldn’t blame jockey James McDonald for being excited about what lies ahead at Randwick tomorrow and the spring at large. 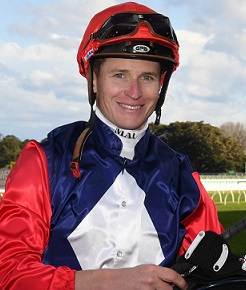 James McDonald will have a wealth of talent under saddle at Randwick on Saturday. (Pic: Steve Hart).

The premier hoop could easily wax lyrical about Nature Strip but we let that slide, largely, this time as he’s done plenty of talking already.

But what of exciting filly Hungry Heart or the untapped Reloaded, then there’s Kinane who exploded onto the scene in the autumn, and Archanna, a half-sister to the freakish The Autumn Sun.

McDonald doesn’t hide his opinion of Hungry Heart, a filly who many have already handed next month’s Flight Stakes to, and while he stopped short of declaring she’ll win the Group 2 $200,000 Darley Furious Stakes (1200m) he says if she does they’ll be hard pressed to beat her over further.

“She is first-up and is taking on fitter horses that have had a run and over a trip that is going to be short of her best,’’ McDonald said.

“She has a bit of class on her side so hopefully that will come through and she runs very well.”

The daughter of Frankel won the Sweet Embrace Stakes at her second start and ran a sound fifth behind Farnan in the Golden Slipper in a preparation that her breeding says any win would be a bonus.

Her reputation has her holding top spot with TAB at $2.80 in the Furious and she’s the only horse under double figures at $3.50 in early Flight Stakes betting.

“They are an even bunch of fillies, they’re all lightly raced and no-one has set the world on fire so there’s a chance for Hungry Heart to put her hand up and be counted,’’ McDonald said.

“I do like her, she goes well. She did a good job as a two-year-old and she was only going to get better as time went on.

“She’s come back in good order, she seems to be in good form and we’re just hopeful she performs well even though she’s definitely going to be a better filly when she gets over that mile trip.”

Just one win, after eight starts, sits against Reloaded’s name as he throws himself into his four-year-old year in the Group 2 $200,000 Drinkwise Tramway Stakes (1400m) and he’s a horse McDonald is expecting to blossom.

He was the horse trainer Chris Waller earmarked as his autumn carnival dark horse and while he didn’t win in that prep he was placed in a Rosehill Guineas and ran fourth in a Randwick Guineas.

“He’s developed really well and is working well, he’s been a pretty good performer without cashing in, he’s put two nice trials together to prepare for the 1400m assignment,’’ McDonald said.

“He will run as good as he can go. Over seven (1400m) he can jump and travel and hopefully show his best, albeit he is first up you have to remember.

“So he will jump out of the ground once he has a run and it stimulates him a bit more.”

It’ll be stablemate Kinane’s second step in a spring some said could be at his mercy when he tackles the ATC Farewells Subzero Handicap (1500m).

His profile soared after a runaway Frank Packer Plate win and talk of exorbitant offers from Hong Kong but his return was a little low key running fifth behind McCormack over 1400m two weeks ago.

Reloaded runs fifth in a trial at Rosehill on August 18

From where McDonald sat it was an exciting return and while he only has an extra 100m to work with he’s suggesting the gelding, $5 favourite with TAB, will be harder to beat.

“Again it is a stepping stone and he’s there to run really well and he’s improved off that run significantly going off his work.’’

Archanna was a beaten favourite on the Kensington track at her first run since May but McDonald is out to go one better in the Quincy Seltzer Handicap (1300m).

The younger half-sister of former star colt The Autumn Sun loomed to win the race but was outgunned by a fitter horse on the day. Fitness won’t be such an issue now.

“She was super, I was really impressed with her,’’ he said.

“She’d only had the one trial leading in and she just peaked on the run simple as that. She’s a handy mare who has improved off the break and I expect her to be fighting out the finish for sure.”

And the last word from McDonald on Nature Strip, who commences his TAB Everest campaign in the Group 3 $160,000 TAB Concorde Stakes (1000m) – “I can’t wait for him to kick off, he looks ideally suited. It’s a small field and he’ll do his thing and be hard to beat.”