The inaugural running of the richest race in Western Sydney, the Iron Jack Golden Eagle, provided plenty of drama and an action packed finish as Kolding produced a late burst to take out the $7.5 million race.

A star studded field of four-year-olds converged on Rosehill Gardens, in the heart of Sydney’s West, and it was Rosehill trainer Chris Waller and jockey Glen Boss to the fore again as Kolding swept past three time Group 1 winner Sunlight in a slick 1:28.28 over the 1500m. 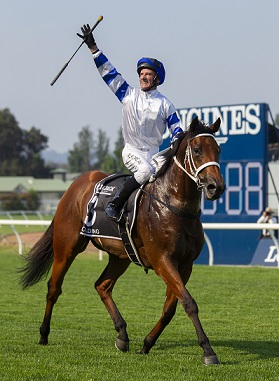 Attracting a crowd of 20,756 under perfect spring conditions, the Iron Jack Golden Eagle has cemented its place as a worthy addition to the Everest Carnival.

“For its first ever running the Iron Jack Golden Eagle has been extraordinary,’’ said Racing NSW’s Chief Executive, Peter V’landys AM said.

“We couldn’t have asked for more and it’s only going to keep growing.’’

Ten per cent of the $7.5 million prizemoney from the Iron Jack Golden Eagle is donated to charities chosen by each of the 16 runners.

On the back of Kolding’s win the National Jockeys Trust will be handed a cheque for $410,000 from the gelding’s win. Dementia Australia, chosen by Sunlight’s owners, receive $150,000 while third placed Mizzy was racing for Ronald McDonald House who will pick up $75,000.

Outstanding sprinter Pierata proved a class above his opposition in the inaugural $1 million Redzel Stakes (1300m) following his fifth placing in the TAB Everest.