Trainer Richard Litt says the changes to the Sydney spring carnival have given him plenty to think about when it comes to working out his moves with star colt Castelvecchio. 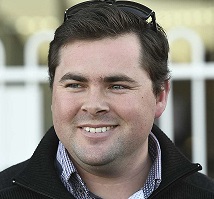 The Champagne Stakes winner has been back in the stable for less than a week and Litt is a while off locking in a spring plan for him but it will start in Sydney with the Group 1 Golden Rose (1400m) the first major target.

Litt joked shortly after claiming his maiden Group 1 win that having to navigate a spring carnival campaign for a horse is foreign to him and he’s still uncovering races the Dundeel colt can tackle.

“There are races every week, all sorts of three-year-old races he can run in,’’ Litt said.

“I only discovered the other day he’s eligible for the Bondi Stakes and he loves Randwick.

"It’s incredible, if you have a half-decent horse, there’s such good prizemoney here you don’t really need to travel.

“A Cox Plate is very enticing and it’d be exciting to have a runner there. But I wouldn’t be going there unless I thought I could win, you don’t go to that race just to run around.’’

Castelvecchio won three of his five starts as a two-year-old and thrust the 29-year-old Warwick Farm trainer into the limelight with wins in the inaugural $2m Inglis Millennium and the Group 1 Champagne.

And he was rapt with what he saw when the colt walked back into the stable last Wednesday.

“He’s matured, he’s put on a lot of condition and he’s not an overly tall horse but he’s an absolute complete athlete,’’ he said.

“He’s matured in the right places and we couldn’t have asked for him to come back better.

“The world is his oyster, he can do whatever we want.’’

Litt said he probably won’t make a judgment on what race Castelvecchio will resume in until he’s closer to a trial but it seems likely it will be either the Group 2 Run To The Rose (1200m) on September 14 or he could attack the Group 1 $1m Golden Rose (1400m) first-up two weeks later.

The Caulfield Guineas-Cox Plate double obviously looms if he’s successful but as Litt said Sydney provides him with options as well.

They include the Group 2 Stan Fox Stakes (1500m), which has been moved to Spring Champion Stakes Day on October 12 leading into the $1m Bondi Stakes (1600m) for three-year-olds on October 26.

“We’ll get him to the trials and see how he comes up and he should be ready to rock and roll around the Run To The Rose time,’’ he said.

“We might just sit back and wait a bit and pick the right race like we did last time.

“You’ve got to have a bit of luck on your side but if you’ve got the horse you have a chance.’’

Castelvecchio is on the third line of betting with TAB for the Group 1 Golden Rose at $15 with Godolphin colts Microphone and Tassort sharing top billing at $11.