One of Australian racing’s most successful and respected administrators Lindsay Murphy has announced plans to retire from the Australian Turf Club after a stellar career of 42 years in Sydney racing.

The current General Manager of Racecourses for all of the Australian Turf Club’s four racecourses, Mr Murphy will officially finish on 31 July this year.

Since starting work as a junior clerk in the racing office of the Sydney Turf Club in 1977, Mr Murphy has gone on to oversee track care, maintenance and rebuilds of training and course proper surfaces at all of Sydney’s racecourses.

Most recently he played an integral role in the highly successful rebuild and return to racing of the Kensington track. 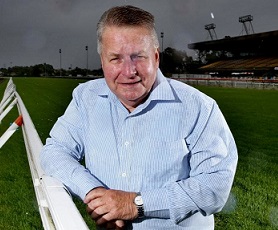 Amongst many projects and highlights during his illustrious career, Mr Murphy helped lead a full redesign and new drainage system at the Canterbury Park track in 1998, still recognised as one of the best tracks in Australian racing.

Mr Murphy’s expertise has been regularly sought by race clubs around Australia, as well as from international jurisdictions.

Along with working closely with horses and the characters of racing, Mr Murphy highlighted the diverse roles he had enjoyed, including as a Clerk of Scales, Timekeeper, Assistant Judge, Judge and Assistant Starter.

Mr Murphy said the time had come to retire and spend more time with his family, who had made many sacrifices over four decades for his career.

“My wife Bernadette and our four children have been very supportive and understanding for which I am extremely grateful,’’ Mr Murphy said.

“We actually lived on course at Canterbury Park for 22 years which was a great place to raise a family and to see the kids grow up.

“I am also very grateful for the guidance and support I have received from all of the Chairmen, Board Directors and CEOs over all these times.

“Racing is a time consuming business and Bernadette and the children have made many sacrifices.

“I’m looking forward to spending more time with my family and grandchildren and I will continue to go racing as much as possible but in a more relaxed capacity.’’

“Lindsay is not only a legend of Sydney racing for his long list of achievements but also someone widely respected in racing circles around Australia and beyond,’’ Mr Heddo said.

“He has been a fantastic manager of many projects but also a wonderful leader and mentor to countless colleagues.

“Lindsay leaves a lasting legacy and he departs our Club with all of our racecourses in magnificent, world-class condition.

“We also recognise and acknowledge the wonderful support Bernadette Murphy and all of Lindsay’s family have provided.

“The Australian Turf Club warmly congratulates Lindsay on his distinguished career of over more than four decades and wishes him a long and happy retirement.’’