All through his 2019 TAB Everest campaign, trainer Les Bridge kept telling people Classique Legend was uniquely talented but a preparation behind the top sprinters. 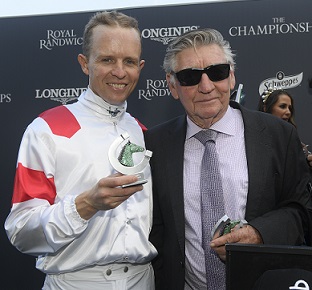 A year on, though the grey has had an interrupted 12 months with a ‘will-he or won’t-he’ go to Hong Kong situation, Bridge says he’s looking forward to showing off a “better prospect’’ at Randwick on Saturday.

While the Group 2 $500,000 Bowermans Commercial Furniture Shorts (1100m) is far from his grand final both Bridge and jockey Kerrin McEvoy suggest Classique Legend is in a good place to announce his arrival on the Everest scene for 2020.

“I think he’s improved, he’s a lot stronger horse now than he was before last preparation,’’ Bridge said.

“He is a better prospect, he’s stronger. I would have liked to race him over the autumn carnival, in the TJ and those sorts of races, but he was in quarantine then.

“It hasn’t been ideal but I don’t think it has been disastrous. I think he’s all right and has come through it all pretty well, the horse looks terrific.”

Classique Legend had a hard luck story in the 2019 Everest, he was badly held up and was only beaten 2.5 lengths in running sixth behind Yes Yes Yes, then he finished his spring with an unplaced run in the Golden Eagle.

Once it was decided Classique Legend was staying in Sydney, and his owner Bon Ho secured a TAB Everest slot, Bridge had to work out how to give the gelding a hitout to give him something to do before the spring.

He selected the Listed Bob Charley AO Stakes (1100m) at Randwick in June and while significantly underdone he carried 60kg on a very wet track and was able to prevail.

“I had to bring him in and give him a run so he didn’t go 12 months between Everests,’’ Bridge said.

“How do you know how fit they are, he only had six or seven weeks so he was probably three quarter fit for that race. Since then he’s done an absolute treat.”

McEvoy said the five-year-old is significantly fitter for the Shorts, compared to the Bob Charley, a race he finished a close second in behind Pierata in 2019.

He won a trial at Newcastle three weeks ago and McEvoy said his work since then is exactly what he wants to see at the start of a big preparation.

“I’m really pleased with him, he’s come on since the trial and the natural progression has seen him jump ahead nicely,’’ McEvoy said.

“He is bouncing around coming off the track from his work so he’s feeling well.

“We’re of the belief that he’s fit enough to run really well knowing there’s a nice bit of improvement to come once he gets these two prep runs into the Everest.’’

Classique Legend wins a trial at Newcastle on August 26

He said he’s happy enough drawing out in 10 given a lot of the likely speed is drawn around Classique Legend and the horse is versatile enough to be wherever he wants him in the run.

TAB has Classique Legend marked as second favourite at $4.80 behind Bivouac ($3.90) and both horses are on the $11 line in TAB Everest betting.

Bridge said he’ll follow the same path as he did a year ago, progressing to the Premiere Stakes (1200m) in two weeks then the TAB Everest another two weeks later.

In his typical deadpan style, Bridge said he knows climbing Everest won’t be easy but he has plenty of faith in his horse.

“None of those races are easy but he is a high quality horse we know that,’’ he said.

“I’m looking forward to it more this year because I’m more confident.”