Stayer 'Ready To Be Sacked' Back In Form For Hawkesbury (Thursday)

A country mother of five who trains racehorses and a rookie apprentice who began riding only 16 months ago will combine with a “retired” gelding seeking perhaps the unlikeliest of victories at Hawkesbury on Thursday.

Not that eight-year-old hat-trick contender Lead Choreographer ($13 on TAB), twice a city winner earlier in his career, doesn’t have a chance of winning the Blakes Marine Conditional Benchmark 68 Handicap (1800m) because he does, two recent country triumphs sealing a remarkable comeback. 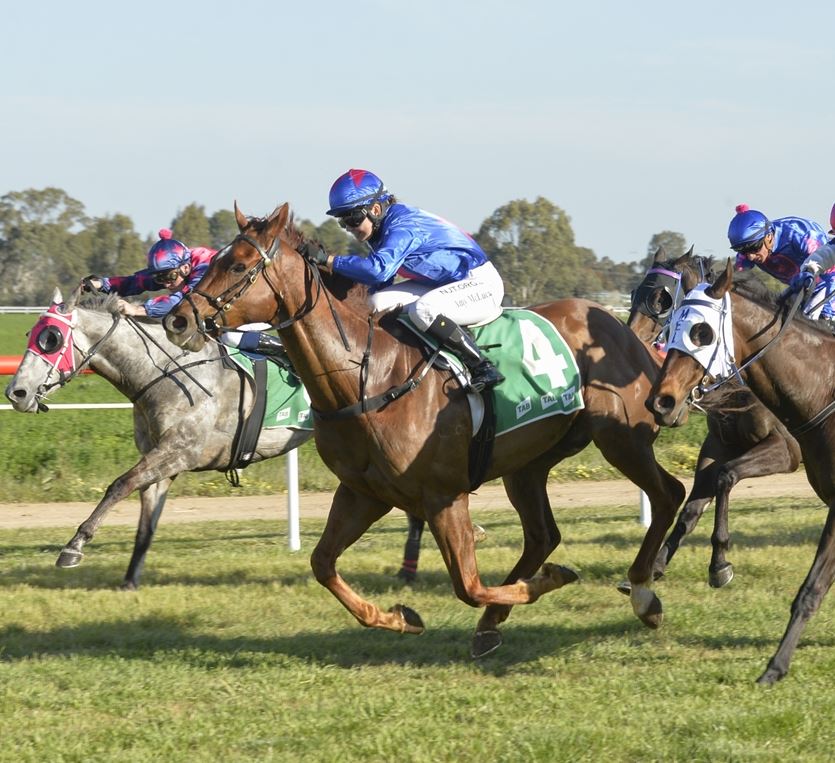 Lead Choreographer and Amy McLucas (no.4) combine to score at Cootamundra. Image by Bradley Photographers

Exeter-based Sarah Murray-Leslie prepares the former city slicker, who will be ridden by 3kg claimer Amy McLucas, credited by the trainer as playing a major role in reviving the Irish-bred import’s racing fortunes.

McLucas had her first ride in June last year on Canberra’s ACTON track and has already collected 25 wins.

Lead Choreographer began his career with Roger Varian, one of the UK’s leading trainers, and won a 2018m Maiden at Windsor on debut in April 2016 before finding his way to Australia after only three starts and entering the Rosehill stables of last weekend’s successful Caulfield Cup trainer Chris Waller.

He won two city races under Waller’s care, including a Benchmark 70 Handicap (1400m) at Royal Randwick on 25 April 2018 (exactly two years after his debut victory). A number of stable changes later, Lead Choreographer supposedly ran his last race when last of 12 in a Benchmark 78 Handicap (1300m) on the Kensington Track in April 2019 at his first start in 12 months.

Enter Murray-Leslie, who does a terrific job with a small team and is returning to the provincial track where she scored with Stone Cold in November last year, with Jason Collett aboard.

“Lead Choreographer was sent to a farm about 10km from where I live, and I managed to buy him privately to try my luck with a family syndicate,” Murray-Leslie explained last night. “Before I got him, he had a tendon injury which kept him off the scene for a year and also was a stallion for quite a time before being gelded.

“I’ve had Lead Choreographer since last year, and it’s been a long road to get him back to the track, let alone win another race. He’s been a real naughty horse, and seemed really reluctant to be a racehorse again.

"He has a four-acre paddock at home and is very strong, and I ride him in a stock saddle. Lead Choreographer has a lot of ability, but just wasn’t bringing it to the races.

“In fact, I was ready to sack him a month or so back. I took a tongue tie off him because he didn’t like it and Amy (McLucas) started riding him in races and they clicked.”

After finishing last of nine at Nowra on September 20 with senior rider Lee Magorrian aboard (he also rode him whilst an apprentice in that ANZAC Day victory at Randwick two and a half years ago), Lead Choreographer has seemingly relished a young woman’s touch, winning his last two starts at Cootamundra on October 4 and Queanbeyan nine days later.

Those wins were over 1400m and 1460m respectively, and Murray-Leslie is looking forward to seeing how he fares at 1800m at Hawkesbury.

“It has taken a long time to get him fit, but I’ve had over 1000 starters and never had a horse pull up as well as he did after his last win,” she said. “I’m getting him up to a suitable distance. He has won up to 1600m in Australia and has been placed a couple of times at 2000m in town.

“Hopefully, he will put in again tomorrow and provided he does he will run well. But you can never guarantee it.”

McLucas’s claim will lessen Lead Choreographer’s weight to 53kg (2kg below the minimum) to help counter the rise in class on his latest country wins in Benchmark 58 Handicaps, where he has carried 58kg (Cootamundra) and 60kg (Queanbeyan). It is easily the lightest weight he will carry in 12 previous starts for his new trainer.

A number of dual-venue acceptors have been withdrawn from today’s Kensington Track meeting to run at Hawkesbury tomorrow. They include Rosehill trainer David Payne’s Crown Affair ($9.50), one of Lead Choreographer’s rivals, and apprentice Brandon Griffiths will claim 2kg on him.

Hawkesbury-trained Budhwar (Keagan Latham, $4.80) and Wairere Falls (Tommy Berry, $3.10) also are Kensington absentees to oppose one another in the Celebrate Xmas At HRC Benchmark 64 Handicap (1500m) for colts, geldings and entires.

First starter Sirens, a three-year-old colt by Exceed and Excel, is the first foal of the 2016 Group 1 Coolmore Classic placegetter Solicit, whose breeding career was tragically cut short when she had to be put down in June last year, and numbered among her five Group 2 and 3 victories the 2015 Hawkesbury Crown (run at Rosehill that year). Her second foal, a colt by Snitzel, died soon after birth.

Sirens, one of Sky Racing analyst Paul Joice’s specials, fetched $500,000 at last year’s Inglis Australian Easter yearling sale and has won both his recent trials at Rosehill on September 28 (900m) and Randwick on October 12 (1050m).

The rail for tomorrow’s meeting is out 3m from the 1100m to the 450m, and in the TRUE position for the remainder. A Soft 5 rating was posted this morning, with a penetrometer reading of 5.27.