There's an air of confidence in the Coolmore camp that Ten Sovereigns is the right horse to win the $14m TAB Everest - if he has conditions to suit him.

The Irish raider arrived at the Canterbury quarantine centre on Sunday and was out on the track with companion National Guard for some light exercise less than 24 hours after touching down.

Aidan O'Brien's travelling foreman Andrew Murphy, who was in Sydney last year with U S Navy Flag, said Ten Sovereigns lost about 7kg on the trip but is well on the way to stacking that back on. 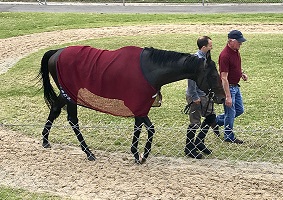 Murphy confirmed lessons learned from a year ago mean Ten Sovereigns, winner of the July Cup just as U S Navy Flag was, will only run in the TAB Everest if Randwick is on the good side.

"Don't run a horse if the ground doesn't suit him which will be the same with this fellow,'' he said of that lesson.

"It's a long way to come and a lot of money at stake but it's just not worth it.

"Hopefully we don't get the rain because that would be a disaster. If we get the ground we think we have the right horse.''

Ten Sovereigns is a $15 chance in TAB's Everest market and Murphy said the fact there are plenty of familiar names in the field so far makes it easier to line him up.

He said there were excuses for the four-year-old's last start sixth behind star sprinter Battaash in the Group 1 Nunthorpe Stakes (1006m) at York on August 23.

"You have to hit the gates quickly which he missed the last day and was on the back foot,'' he said.

"Six (furlongs) is his ideal trip so we are looking forward to it.

"He's nearly there (fitness wise), not quite, we just have to add the finishing touches. One thing about Aidan, he likes when they leave to have them trained and we finish them off.''

Ten Sovereigns walked a lap and broke into a light gallop for a second lap of the Polytrack on Monday morning and will begin having those finishing touches added later this week.

Coolmore's Tom Moore said the entire was earmarked early as an Everest horse and the form lines around Ten Sovereigns make a compelling case.

"He beat Advertise who is an incredible horse himself by over 2-1/2 lengths and back in third was Fairlyand who won a Group 1 later in the season,'' he said.

"Ten Sovereigns is the right horse, everything didn't go to plan for US Navy Flag although that might have been different with the downpour in the morning and before the race.

"He seems to have settled in well, he's an imposing type of horse and has immense quality.''

Decisions on whether stable jockey Ryan Moore will partner Ten Sovereigns, and if Aidan O'Brien himself is on course at Randwick will be made closer to the race.