Sovereigns In Quarantine For Everest As Coolmore Bides Time

July Cup winner Ten Sovereigns is set to enter quarantine in Ireland for a trip to Sydney but his participation in the TAB Everest is not confirmed.

Coolmore Australia boss Tom Magnier said on Sky Sports Radio on Thursday that Ten Sovereigns would need a good track to take his place in the $14 million sprint and there are other options both for the horse and the slot.

“The plan is he’s going into quarantine but we have Yes Yes Yes running in Sydney this weekend so we will watch and see what happens there,’’ Magnier said.

“When he won over six furlongs in the July Cup that was hard ground and that’s the way he needs it. 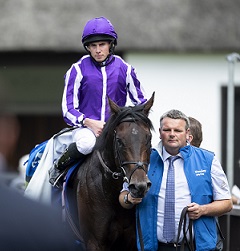 “He’s going into quarantine but we haven’t locked away our slot yet.’’

It was originally thought Ten Sovereigns would be joined in quarantine by another Coolmore horse Fairyland, a noted wet tracker, but that’s off the table.

Magnier is confident Ten Sovereigns would be a factor in the TAB Everest on good ground but after bringing out last year’s July Cup winner US Navy Flag and striking a heavy track there needs to be a Plan B.

“There’s other races we could look at as well, we wouldn’t rule out him not running in something else.

“Aidan does understand we have to make a decision sooner rather than later.’’

The other options include Yes Yes Yes, the Chris Waller colt that Coolmore purchased an interest in prior to the Golden Slipper earlier this year, and basically any other available horse.

Yes Yes Yes makes his season return in the Group 2 $200,000 Sydney Markets Run To The Rose (1200m) at Rosehill on Saturday and Coolmore will be watching him closely.

“Chris is very happy with the horse, we’ll learn a lot about how he has come on as a three-year-old when he steps out on Saturday,’’ he said.

Coolmore’s preference is obviously any horse they have an interest in but Magnier said there’s still a race to be won.

“There are a lot of good horses around at the moment that could be considered for a slot,’’ he said.

“There’s large prizemoney on offer and you have to do your best job to get it.’’