Snowdens To Test Whether Superman's In Doncaster League

Exactly where I Am Superman fits into the scheme of things is something co-trainer Peter Snowden has no firm opinion on as yet but he's confident the ex-UK galloper is a lot more settled than the horse that landed in the spring for the Golden Eagle. 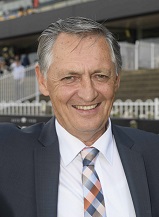 His former trainer, and part-owner, Michael O’Callaghan always believed I Am Superman would be an ideal horse for Australian conditions so left him with Peter and Paul Snowden.

The gelding ran 13th in the Golden Eagle in November but being what Snowden describes as a “hot head’’ he’s prepared to be forgiving.

“He’s a nice type of horse. When we knew were going to get the horse we dug into what he’s done and where he’s been and quite liked what we saw,’’ he said.

“His biggest problem is he was a bit of a hot head. In the Golden Eagle he took off and went around the field and spent his pennies way too early.

“The work since we’ve had him has been to get him to settle and relax and both trials have been solid. He’s a fairly casual worker on his own which is surprising for a strong willed horse but put him with company and he’s a different horse.’’

I Am Superman takes his place in the Group 3 $160,000 Liverpool City Cup (1300m) at Randwick on Saturday, a race Snowden will use as a test to see if the four-year-old is up to the lofty goal he’s being set.

He’s nominated for the Group 1 $3m The Star Doncaster (1600m) on April 4 so the Snowdens are throwing down the gauntlet to the horse quickly.

“Before the first trial I was a bit worried about how he was going but I quite liked the way he trialled and I liked the second trial better in a much stronger trial,’’ he said.

“I think he is going okay but no doubt we will know more about him after Saturday.

“The Doncaster is our target race but whether he is good enough for that time will tell. It’s a big ask but he’s only lightly raced and has got talent but what level he will be we’re not sure.’’

The gelding opened $51 and by Friday morning had firmed to $17 with TAB.

Snowden is expecting to see the best of consistent mare Reelem In Ruby in the Group 2 $200,000 Guy Walter Proven Thoroughbred Stakes (1400m).

The four-year-old missed a placing for the first time in her 11 starts when she resumed in the Triscay Stakes (1200m), finishing 10th behind Sweet Deal, but Snowden is prepared to wipe that run from the record.

Punter’s Intelligence sectional data shows she ran 34.98 for her last 600m, third best in the race, and clocked the fastest 200m splits between the 800m and 200m.

“When you watch what she did I thought the run was very good,’’ he said.

“I just put a pen through that, she's drawn a better gate and she’s better off at the weights so I expect her to turn the form around.

“She still ran on well, she needed to, but I saw enough in that race to be happy with that.’’

Reelem In Ruby, $6 with TAB, meets the winner Sweet Deal 1kg better for the Triscay Stakes which on paper is not enough to reverse the result but Snowden doesn’t expect his mare to be giving away nearly as much start.

While he’s happy to forgive Reelem In Ruby, Snowden said talented filly Missile Mantra is on notice in the Group 1 $500,000 Heineken 3 Surround Stakes (1400m) after a lacklustre resumption two weeks ago.

Runner-up to Flit, beaten a nose, in the Thousand Guineas in the spring, she could only manage to beat one home in the Light Fingers Stakes (1200m) behind the same filly and Snowden said she was the only horse that let him down at that meeting.

“You always worry when good fillies don’t run like they can because her work has been outstanding,’’ he said.

“We didn’t expect her to win but wanted to see her charge home. It was a day where it was hard to make ground but I would have liked to seen her finish better.

“We put blinkers on. It’s not D-Day but we certainly want to see her run better.’’