Snowdens Keen For Dame To Get Her Feet Wet

She’s already safely in the Golden Slipper field so talented filly Dame Giselle is on a ‘fact finding’ mission to see how she copes with a heavy track for the first time at Randwick on Saturday.

Co-trainer Peter Snowden said there’s plenty to gain by sending the Golden Gift winner around in the Listed $150,000 Darley Lonhro Plate (1000m) as the stable has very little data on her ability in wet ground.

Randwick was rated heavy 8 on Thursday and Snowden doesn’t expect to be racing on anything significantly better than that come the weekend.

“It’s the race we had picked out for her, we have to get her started this week,’’ Snowden said.

“She hasn’t worked on wet ground so whether she gets through it or not we don’t know. You won’t know until you try them and that’s what Saturday is about.

“It could be a wet Slipper this year, we’ve had a few of them over the years, and knowing whether she can handle it or not later on will be very helpful.’’

Dame Giselle wins a trial at Rosehill on January 28

What we do know about Dame Giselle’s wet track credentials, given Snowden said virtually all her work has been on the polytrack with the rain around, is a barrier trial win on a soft 6 on January 20 and a look at her pedigree.

Dame Giselle’s dam Ballet Society won on a heavy 10 at Sandown at her second race start, ran fifth in a Group 1 as a four-year-old and was a Group 2 winner on a soft 7.

The filly was installed Golden Slipper favourite after her Golden Gift win - where it's easy to forget she was the strongest on the line runing a race best 11.21 last 200m (Punter's Intelligence) - but sits at $11 with TAB after impressive recent wins by Cellsabeel, who ran fourth in the Golden Gift, and Hanseatic.

She’s a $2 favourite to take out the Lonhro and Snowden said aside from the wet track question mark he couldn’t be happier with the youngster and isn’t overly concerned about drawing the outside alley.

“We’ll approach it like any other race, we’ll know more on race day what sort of track we have to work with,’’ he said.

“I’m really happy with her, her work has been good and her trials have been good and she looks fantastic. And there’s been some good form come out of (the Golden Gift) which is good.’’

Missile Mantra was narrowly beaten by Flit in the Thousand Guineas at her last run in the spring and Snowden said he expects a positive return without being bullish about a first-up win.

“It’s short of her best trip and the further the distances got last prep the better she got,’’ he said.

“The Vinery (2000m) is the race we are looking at for her. We went to a mile last prep and she came up a shandy short, but this time in she is much stronger and she is going to get further. 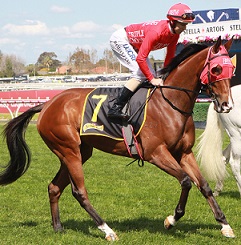 “I don’t know if she is sharp enough to win but her work suggests to us she is well enough and good enough to be competitive.’’

Snowden admits it’s a real throw at the stumps with Sangria in the Light Fingers but can’t see any downside to having a crack at a Group 2 race with a filly well and truly on the up.

Sangria has won three of her five starts, including a first-up win at Gosford almost two weeks ago, and at $8.50 with TAB is the more favoured of the Snowden duo with Missile Mantra a $13 chance.

“I don’t normally do this but I have nothing to lose. She is a filly who likes wet ground and she’s had two trials and a run and that might be an edge to help her,’’ Snowden said.

“The only thing she lacks is race craft, she hasn’t been to a carnival with high pressure.

"If she runs a place it’s an advantage if she wins you know she’ll be up to them for later on.’’

The Group 1 Coolmore Classic (1500m) is the target for super consistent mare Reelem In Ruby and Snowden said she needs to get going in the Group 3 $160,000 Robrick Lodge Triscay Stakes (1200m) on Saturday.

The four-year-old ($6) is yet to miss a place and while she has a few things against her the stable is expecting a typically gallant performance.

“She never runs bad and she handles soft ground. The 58kg and barrier 14 is no help but she needs to go around,’’ he said.