Co-trainer Paul Snowden has warned early Inglis Millennium favourite Dame Giselle is at this stage unlikely to contest next month’s $2m feature and instead be aimed at the Golden Slipper.

TAB has released the first market for the second running of the Millennium, staged over 1100m at Warwick Farm on February 8, and the Peter and Paul Snowden-trained Dame Giselle, impressive winner of the Golden Gift in November, sits on top at $6. 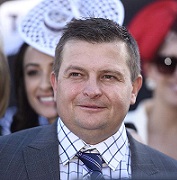 The Snowden stable also prepares equal second elect Wild Ruler, winner of the Inglis Nursery at his debut in December, at $8 with Cellsabeel who ran fourth behind Dame Giselle on debut and has been impressive winning two trials recently.

Snowden confirmed Dame Giselle is a “doubtful starter’’ and said exactly which horses will target the Millennium from his stable might not become clear for another couple of weeks.

“I wouldn’t rule it out completely but it’s not on our radar,’’ he said.

“You won’t see her step out in a trial for maybe three weeks but she’s been in the stable and she could trial tomorrow (if we wanted).’’

So far this season the Snowdens have been the kings of the kids winning 14 two-year-old races highlighted by Dame Giselle’s $1m Golden Gift.

The Inglis Millennium launched the career of Castelvecchio last year, thrusting his trainer Richard Litt into the limelight and proving a pathway to Group 1 Champagne Stakes success during The Championships.

TAB’s Gerard Middleton said the market for the February 8 feature will change rapidly as contenders emerge in the coming weeks but those at the top deserve their place.

“Golden Gift and Inglis Nursery form looks strongest at this stage heading towards the second running of the Inglis Millennium,” Middleton said.

“Peter and Paul Snowden once again have a great crop of juveniles and Dame Giselle and Wild Ruler have opened single digits for the Warwick Farm feature along with Cellsabeel for Ciaron Maher and David Eustace.

“Although Dame Giselle is doubtful to head that way, we expect strong betting on the second edition of the Inglis Millennium.’’