Sky's The Limit For It's Me After Stunning Kosciuszko Win

She’s the new darling of NSW racing, and who knows what mountain It’s Me can climb after her heart-stopping win in the $1.3m The Kosciuszko at Randwick on Saturday. 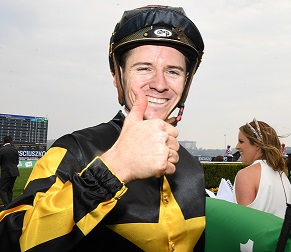 Jason Collett after winning The Kosiuszko on It's Me (Pic: Steve Hart)

If you ask jockey Jason Collett it’s all the way to the top.

There wasn’t much margin for error as It’s Me was buried away when they topped the rise and Collett desperately tried to get her into the clear to unleash that trademark turn of foot.

Just as Mitch Beer’s Redouble burst up inside early leader Man Of Peace to be hailed the winner, It’s Me pounced and made it four from four.

“I can’t quite tell you how high she’ll get to but the way she’s going I would like to say Group 1.

“She’s the best horse. She hit a few little obstacles into the straight.

“Just had to be patient and once I got her into clear air, I didn’t quite see Redouble scooting up on the inside and I just had to ask a bit more of her.’’

The lead up to the Kosciuszko was drama filled with It’s Me having to pass a vet check when she was found to have some mucus earlier in the week.

Her trainer Brett Cavanough made the shock admission that he’d have scratched the mare if it were up to him but he was glad he didn’t and was left to wonder just how good the four-year-old could be.

Will she be back in two weeks for the $7.5m Golden Eagle (1500m) against her own age or in 12 months time will she be trying to conquer The Everest?

Cavanough said he doesn't make decisions on race day and will see how she pulls up, but would like to think by October 2021 she could be on a bigger stage.

“Obviously she’s a very good mare. Are you allowed to cry?,’’ Cavanough said.

“You see what she did today, she was in trouble, knocked them down, got down, balanced up and got the job done.”

“It’s the pinnacle for country trainers,’’ he said.

“The city people sent their Group 2 horse down to Albury, good luck to them, they tried, they went close and it didn’t work.

“It just goes to show a little country mare got the job done.”

It's Me wins The Kosciuszko

Of course a large part of The Kosciuszko is the $5 sweep ticket that funds the $1.3m purse and as it happened the lucky ticket winner who secured It’s Me for the race is one of her part-owners.

Bob Dailey bought just 13 tickets, so spent $65, and when he found out one of his tickets had been drawn he negotiated with the others, including Grand Syndicates racing manager Sam Lyons, and made sure she was in the race.

Needless to say he was a little speechless when her number went into the frame.

“She’s a special filly. I put on social media earlier that if today’s not her day t just means it’s going to be another day. This just shows there’s going to be lots of other days.”

All the results and replays from TAB Everest Day at Randwick