Sky Boy has booked his ticket in the $3m G1 The Star Doncaster Mile (1600m) over The Championships, and Anthony Cummings has no doubt the four-year-old will measure up.

Having won the $250,000 G2 Fugen Villiers Stakes (1600m) at Royal Randwick, the son of Pendragon made it five wins on the bounce holding off a late charge from Aloisia.

Sky Boy taking out the Villiers Stakes at Randwick

Punters Intel reveals that Aloisia ran her last 200m in 12.02s, some four lengths quicker than Sky Boy’s 12.67s and two lengths superior to the second best (My Nordic Hero).

It was a remarkable training achievement from Anthony and Ed Cummings given they plotted the unconventional path of bringing Sky Boy back to the mile after winning over 2000m twice and then over 1800m in a seven run campaign. 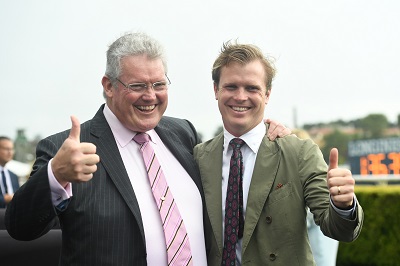 All smiles from Anthony and Ed Cummings (Pic: Steve Hart)

“He had it in his mind that he was too big of a hurry. We had to bring him back two steps, get him to relax and use himself constructively. It is all part of it,” said Anthony Cummings.

“His Group One race will come and his turn will come. It's fantastic to see the plan come together.

“Today he used his speed to get a spot, relaxed and used his speed again at the finish so in terms of race craft he has ticked every now and had to because there was a Group One filly running on behind him. He had to be that standard to win that race today.”

Jockey Christian Reith has developed a formidable combination with Sky Boy, having ridden him in four of his five wins in the sequence. The gelding will spell now and Reith is eager to see what he furnishes into come the autumn.

“Maturity and strength will do him the world of good and if he can do that during the break he'll come back a top line horse,” said Reith, who had to push his body to get down to 53kg. 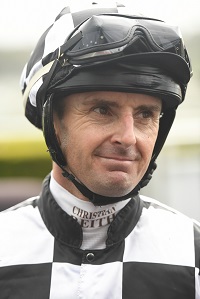 “It's been a hard three weeks getting the weight off but all worth it. He makes my job easy, he jumps well puts himself in a good position. I let him go at the 300m and he does the rest.

“He had a few tell-tale signs that he has had enough because he was a little bit keen in the run but he is a war horse and just kept going. It has been a fantastic job from the stable because it’s not easy to get a horse up in trip then back in trip, up in grade.”

Cummings is of the impression that he’s only “half way there” regarding what’s still to come from Sky Boy, with the trainer expecting the galloper to get out to 2400m in time. First things first though, and that’s mapping out a preparation aimed at The Doncaster, from which Sky Boy is now exempt from ballot.

“It gives us some latitude when it comes to his preparation and that's a god send for any trainer so we'll just poke along towards that. We won't set any Winx unbeaten records but on the way through we might even find her backside in one of those races,” said Cummings.

All of the replays and results for Royal Randwick on Saturday.