Trainer Rob Heathcote isn’t mucking around with comeback sprinter Rothfire’s bid for a shot at the $15m TAB Everest and it showed in a sizzling trial win on Tuesday. 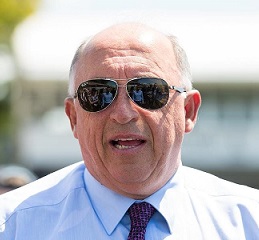 The four-year-old turned heads as he ran 55.95 for the 1000m at Doomben in his first official trial since sustaining what could have been a career ending fractured sesamoid in last year’s Golden Rose – and turning heads was the aim.

“I saw online a couple of people said ‘Heathcote should’ve realized it’s just a trial, why did he make him run that fast’,’’ the trainer said.

“There’s a very simple reason for that. I wanted to make a statement and I think we have.

“He’s run time and Ben (Thompson) came in and said to me ‘there’s plenty left, he was just on the bridle’.”

Rothfire moved from $21 into $13 in TAB’s all-in Everest market on the back of the trial which proved to Heathcote – and he hopes slot holders – that all is well with his recovery from injury.

Heathcote said he was confident the gelding was fit and well having given him a number of “searching gallops” in the lead up to the trial but there was still a small sense of relief.

The horse heads for one week of leisure with the sun on his back at Washpool Lodge before he returns to prepare for the Group 2 $500,000 The Shorts (1100m) at Randwick on September 18.

There was some confusion after the trial about whether James McDonald would partner Rothfire in The Shorts but Heathcote said the champion jockey has been offered first refusal if Nature Strip doesn’t contest that race.

There are currently five slots filled in the TAB Everest – defending champion Classique Legend is expected to be confirmed to run in his owner Bon Ho’s slot, while Nature Strip (Chris Waller Racing), Masked Crusader (Whitby/Werrett), Lost And Running (TAB) and Gytrash (Inglis) have been locked in.

“It’d be a dream come true not only to get him back racing but to get him into the Everest,” Heathcote said.

“There’s still a long way to go. Slot holders would still have a sense of apprehension, he’s got to get back under race conditions and that’s why I’m not messing around.

“I’m going straight to the Shorts where I know we’ll be taking on Gytrash and other Everest aspirants but I want to show my horse is back and he can compete at that level.”

Of course Rothfire was assured of a TAB Everest run last year prior to his injury as he was snapped up by miRunners so Heathcote is confident that slot holders out there know that he’s already considered an elite sprinter.

The 'Thrilla From Chinchilla' is back! 🔥 Almost a year after suffering an injury in the Golden Rose, Rothfire returned to the trials at @BrisRacingClub this morning. pic.twitter.com/eFCxN6BL6r

It’s not just the TAB Everest in Heathcote’s sights, he’s also keen to run Rothfire in the $7.5m Golden Eagle (1500m) – it’s the back up plan if he doesn’t make the Everest but is also on the radar if he does.

Heathcote will be chasing the Group 1 $1m Golden Rose (1400m) this year with the promising Prince Of Boom, currently $51 with TAB, after he won a trial later in the Doomben session.

The three-year-old, who the trainer says has come back ‘bigger and stronger’ will resume at home later in August before heading to Sydney for the Group 2 $200,000 Run To The Rose (1200m) on September 11.

“He was pretty impressive this morning, he’s a quality horse.”