Sizing Up A Classique Everest Gamble 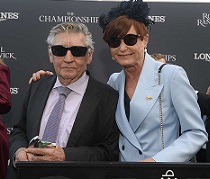 As the $14m TAB Everest on October 19 creeps closer the grey is in ‘boot camp’ at trainer Les Bridge’s Randwick stable.

According to Ho’s racing manager Carmel Size, who has also been putting in the hard yards at bridge's stable while the trainer is recovering from illness, when they purchased GPI Racing’s slot Classique Legend was the horse they had in mind but they also have a plan B.

With just four starts under his belt, including an impressive Group 2 Arrowfield Sprint demolition, the rising four-year-old is all potential but that also means he’s unproven against the country’s best short coursers.

“We're fully prepared for the fact we may be looking for another horse to put in that slot but racing is a dream,’’ Size said.

“You don't turn up at 3am seven days a week if you aren't doing it for the love of a horse and the dream.

“He's strengthened all over, I wouldn't be surprised if you see him in the field.’’

Every morning Size takes Classique Legend for a walk and the gelding makes a point of stopping to look down over Randwick racecourse and take it all in.

It’s a perfect illustration of what could be come October.

“He's slotted back into his same beautiful ways, he's such a no-fuss horse,’’ she said.

“All his habits are exactly the same. He's so interested in what's going on, he’s the best horse I’ve had anything to do with as a personality.

“I've been involved with the horse since I bought him and always loved him but Les, within 24 hours of him walking into the stable, said that's the horse you've been looking for.’’

Such is the respect Classique Legend has earned in his short career he’s a $9 chance in TAB’s Everest market - and $6 in the $7.5m The Golden Eagle - and he’s about five to six weeks off bring publicly produced for the first time since the autumn.

A start point for his Everest bid isn’t yet determined and Size said that will become clearer once he’s given that first serious hitout.

“I think we might take him for a trip away for his barrier trials, I'll ask them at Hawkesbury if they'd like to have us back.

“He's pretty gross at the moment so he might need two trials before he goes to the races.’’

Classique Legend wins the Arrowfield Sprint during The Championships

Champion jockey Kerrin McEvoy has been on board Classique Legend in all four race starts and his only barrier trial to date and will have first refusal for the Everest ride.

It creates a potentially interesting dilemma for McEvoy – continue the association with dual Everest champ Redzel or go with the up and comer.

But it’s also a decision he won’t have to make quickly as it seems unlikely the two horses will clash first-up with Redzel due to kick off in the Group 3 Concorde Stakes (1000m) on September 7.

“He's just ridden a winner for the Queen so Sir Kerrin is how we should refer to him,’’ she joked.

“If he has an obligation to another stable then so be it, I don't think I'll be left without a jockey.’’