Trainer Peter Snowden says he won’t be disappointed if Redzel doesn’t repeat his first-up win in what shapes as a crackerjack Group 2 $500,000 The Shorts (1100m) at Royal Randwick on Saturday. 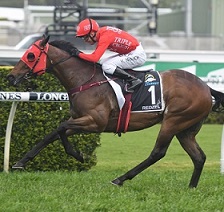 In fact he suspects the Concorde Stakes win that resurrected the seven-year-old’s prospects of making it a third TAB Everest next month could also take its toll on the horse that chased him home.

And rival trainer Tony McEvoy is adamant Sunlight will play a bigger role in the speed picture than she did in the Concorde while the Santa Ana Lane camp suggests the TAB Everest favourite is vulnerable first-up and that the on pace pattern of Concorde Stakes day could render that form unreliable.

Add to that the first appearances this spring of boom four-year-old Classique Legend, class mare In Her Time and Godolphin’s interim number one seed Osborne Bulls and it’s a huge puzzle facing punters a month out from the TAB Everest, one that could throw up more questions than it answers.

Snowden said Redzel, who opened $6 in TAB’s all-in Shorts market, appears to have come through his third successive Concorde win well but it will be a tough win to replicate against a deeper field.

“It’s hard off that performance. He ran 56 and change and that’s quick, it’s hard to do that again in two weeks and again after that,’’ Snowden said.

“I think Pierata might be in the same boat. Peak performances really early in the prep are not ideal so it won’t surprise me if he doesn’t run as well.’’

Pierata ran his last 600m in 31.61 (Punter's Intelligence) and did that coming from last.

All that said, Redzel and Pierata will likely have more favourable conditions with the prospect of at least a soft track at Randwick come Saturday.

Santa Ana Lane, favourite for the $14m feature with TAB at $5, shares Redzel’s place in the Shorts early market but he has a couple of statistics playing against him in his only race prior to The Everest.

The Anthony Freedman-trained gelding hasn’t won at 1100m since his debut win and he hasn’t won first-up since his third race start.

Stable rep Sam Freedman said the Santa Ana Lane crew took particular interest in the Concorde and wonders whether it will be the right pointer to The Shorts.

“It was a good race, obviously Pierata was the flashing light and I thought Sunlight’s last 50m-100m is indicative she has come back in good order,’’ he said.

“It was leaderish that day so the form might switch around.’’

Redzel wins the Concorde Stakes at Randwick on September 7

A wet track wouldn’t be Sunlight’s preferred surface but at this stage there’s no deviation from the plan from Tony McEvoy but what will be different from the Concorde is the mare’s position in running.

McEvoy is adamant Sunlight’s best is seen when she is right on the speed and he says she’ll be “right on the bunny’’ on Saturday.

Many were left scratching their heads as to how Redzel managed to get control of the Concorde with a couple of other speedsters engaged but McEvoy isn’t underestimating what it takes to beat Redzel, let alone the rest of the opposition.

“We do so many maps, who is going to be advantaged by taking him on?’’ he said.

“If they were going slow it’s a different story but they weren’t going slow. Had we drawn better he wouldn’t have got it that easy and we would have been up there with him.’’

Sunlight was a $15 chance in both the Shorts and TAB Everest markets on Monday.

October conjures up the very best of memories for Northern Rivers trainer John Shelton so it wouldn't surprise if he ...
Read More

What can we say about Classique Legend’s sizzling TAB Everest win that hasn’t already been said? Not only did he ...
Read More