Sharpe On Another Golden Journey With Rothfire

Melanie Sharpe didn’t think it would happen again, at least not so soon.

It wasn’t that long ago Sharpe, 31, was on the ride of her live travelling across the country and overseas with Robert Heathcote’s former star Buffering and she has to pinch herself when she looks at exciting three-year-old Rothfire and wonders where he could take everyone.

Melanie Sharpe in a selfie with Rothfire.

The circumstances created by Covid-19 has made Sharpe’s job caring for and preparing Heathcote’s latest stable star for a Sydney spring campaign akin to international travel as border closures mean the trainer can’t just bounce between Sydney and Brisbane.

Sharpe and Heathcote have a long association, she was apprenticed to the trainer for a few years before moving on when she decided being a jockey wasn’t for her.

But shortly before Buffering’s first trip to Hong Kong in 2014 she returned to take on the racing manager role and says they couldn’t have a better working relationship.

“He’s a pretty good trainer, he knows what he’s doing, I’ve only ever done what he’s asked me,’’ she said.

“I never thought it would come back around so quickly. I thought I peaked with Buffering, it’s so exciting to have this lad.

“And with his backstory, it’s what dreams are made of.”

The tale of how Heathcote purchased Rothfire for $10,000 but due to an internet scam wound up paying double is well documented, with over $860,000 in the bank and counting the gelding has more than repaid the faith.

Rothfire, on the TAB Everest path, is a hot favourite to make it eight wins from nine starts in Saturday’s Group 1 $1m De Bortoli Wines Golden Rose (1400m) at Rosehill and Heathcote has complete faith in Sharpe to make all the right moves.

“She’s vastly experienced, I’m not anywhere near as nervous because we’ve been through it all before,’’ Heathcote said.

“I talk to the jockey, I talk to Mel more times than I talk to my wife each day. It works.

“Mel’s made a big commitment to go to Sydney and so too has (jockey) Jimmy Byrne.’’

Sharpe says it’s never ideal being away from home for an extended time but when you have a horse like Rothfire, and Buffering before him, and build a rapport it makes things that little bit easier.

Netflix is has also been a handy tool to help pass the time.

She had a close relationship with Buffering though she quickly learned that a horse’s respect isn’t automatic, you have to earn it but when you do it’s a special experience.

“Buffering was the underdog of all racing, the people’s horse,’’ Sharpe said.

Rothfire wins the Run To The Rose on September 12

“We had a good working relationship, I rode him in all his work and he was cool. We had a good time together, he always tried.

“He was a pig, I’m not going to lie, he would chew your arm off if you annoyed him too much but that’s where we knew each other’s boundaries. I had a lot of respect for him.’’

Those couple of years Sharpe spent with Buffering, who retired as a nine-year-old with seven Group 1s to his name, are incomparable but she senses there’s also something special about Rothfire.

And there’s little doubt that Rothfire is a character in his own right and knows he’s a talent.

“He’s a pretty cool dude, not much fazes him, he takes everything in his stride,’’ she said.

“This is his first time travelling away from home and he hasn’t missed a beat.

“He’s started to settle in really well, he has a play and a good look around but he’s not stressed or anxious. He’s a pretty happy horse all round.

“He does have a bit of arrogance about him. He can be a little bit pushy, you can’t blame him for that, but there’s no malice about him and he’s a sweet horse.”

Jockey Jim Byrne put Rothfire through his paces on Tuesday morning to tidy up his Golden Rose preparation and Sharpe couldn’t be happier with where he sits a few days out from the race. 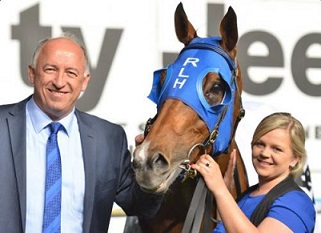 Unlike going into the Run To The Rose two weeks ago, where he would give the course record a shake in a dominant 1-1/2 length win, all eyes are on him this time around.

Despite drawing barrier eight in the nine horse field Rothfire is a commanding $2 favourite with TAB to claim his second Group 1 and really lay down the gauntlet to the older sprinters as the TAB Everest looms.

Of course the three-year-old has a slot in the $15m sprint grand final via miRunners and the eyes are as much on that prize as they are on the Rose.

“He’s tightened up really nicely, his coat looks even better again even though it looked good going into the Run To The Rose,’’ Sharpe said.

“I think we’re on track. There’s a little more pressure there but at the end of the day we want to remember that the Everest is our main goal.

“He’s the type of horse that always tries his heart out, always puts his best foot forward, he puts everything into his races.

“He’s only three and at the end of the day we’re looking after him because we want to have that longevity Buffering had and see him racing up to that age.”

All the fields, form and replays for Saturday's Golden Rose at Rosehill