There’s no Winx this year but star Kiwi Te Akau Shark has been pinpointed as the biggest threat to an international victory in the Group 1 $4m Longines Queen Elizabeth Stakes.

Three Europeans - Addeybb and Young Rascal for William Haggas, and Olmedo trained by Kacy Fogden for Aquis - are settling into Sydney and they’ll be joined in two weeks by three Japanese gallopers in Danon Premium, Mozu Ascot and My Style with eyes on various The Star Championships features.

Winx of course won the past three Queen Elizabeths, including that unforgettable finale last year, but the Haggas-trained Addeybb brings some world class form to Sydney and has the credentials to make a mark.

Harry Eustace, travelling foreman for William Haggas, said there’s a sense of the Queen Elizabeth being up for grabs in 2020 but is wary of racing’s new rising star.

“It’s an added bonus she isn’t there but, look, I think it would have been even more exciting if she was,’’ Eustace said.

“I’m not sure we wouldn’t have come because she was in training. Addeybb’s form is right up there so in soft conditions it would have been more exciting to take her on.

“The fact she isn’t there is a plus for us but there’s Te Akau Shark and the next generation from Australia and New Zealand coming up.’’

Addeybb has a decision over globetrotting Mackinnon Stakes winner Magic Wand over 2004m back in June and his last start was a gallant second to the classy Magical in the Group 1 Champion Stakes (2012) at Ascot in October.

The six-year-old will make his Sydney debut in the Group 1 Ranvet Stakes (2000m) on March 21 where he is a clear $3.50 favourite in TAB’s all-in market, in the Queen Elizabeth he’s at $6 behind Danon Premium and Te Akau Shark.

“Arguably his three best ever runs, two at Ascot and at Sandown, were on right handed tracks so that’s a real plus for us coming here,’’ Eustace said.

“It’s not going to be easy, Te Akau Shark was impressive the other day and he will be Addeybb’s opposition. But on his form from home he can mix it with the very best and the conditions will dictate how well he will run.’’

The stayer didn’t fire in Hong Kong in December but is a three time Group 3 winner up to 2471m in Europe and he will be on trial at two miles in April.

“We are excited to get him up over this trip and finding out will be easier here than at home,’’ Eustace said.

“Hong Kong was as much a fact finding mission travelling wise and I think that’s why he has settled in a day earlier.’’

Young Rascal is expected to contest the Manion Cup (2400m) at Rosehill on March 21 as his lead up to the Sydney Cup where he is at $11 with TAB. 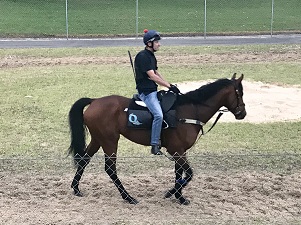 French galloper Olmedo could have his first Sydney start as soon as Saturday week’s Group 2 Ajax Stakes (1500m) on his way to the Group 1 $3m The Star Doncaster Mile (1600m).

Aquis representative Ben Cornell said the Group 1 French 2000 Guineas (2018) winning entire appears to have taken to Canterbury with gusto and is set to step up his work later this week.

“We are still learning about him but the signs are very good, he’s travelled well and settled in well,’’ Cornell said.

“We’ll do a bit more work on Saturday then some serious work next Tuesday and that will tell us where we are at with him.’’

Olmedo is a $26 chance in TAB’s Doncaster market, he was a Group 3 winner over 2000m at Deauville in August and was runner-up in a Group 2 at Longchamps over a mile on October 5.

The Japanese trio entered quarantine on Monday and James Ross, ATC’s General Manager Racing, Wagering and International, said the post-Winx era should see an increase in Northern Hemisphere interest in Sydney racing and it’s already being reflected in the quality attracted in 2020.

“Addeybb is probably the highest rated middle distance horse we’ve ever brought to Sydey so we are very excited about his chances,’’ he said.

“It’s been a real challenge for me to promote races Winx has been in, her efforts are legendary and globally I think she is known as a superstar.

“There’s been plenty of international camps that have had an eye on the race as soon as Winx retired. To see that interest coming back and a strong domestic bench here adds a lot to our carnival.’’