Tommy Berry feels like he’s on top of the world. 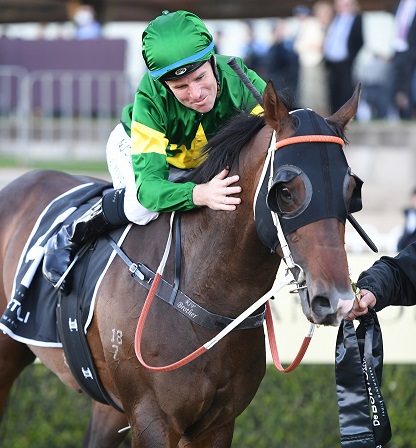 It doesn’t hurt when you’ve got a crack colt underneath you like Team Hawkes trained Ole Kirk.

The Golden Rose of 2012 was Berry’s first Group 1 win – he rode Epaulette for Peter Snowden – and he said it feels like he’s come full circle.

He said it took failing in Hong Kong a couple of years ago to shake him up and work on his fitness and determination.

“I feel like I’m in a great frame of mind, I’m riding for a wide range of trainers and it’s the key to me being where I am at the moment,’’ he said.

“I’m in such a great place and I have a good family at home which gives support when I need it so much.

“Before I left for Hong Kong things were happening for me quite easily. But it was a tough time because I wasn’t firing on all cylinders and was going weeks without winners.

“A lot has happened between my first and my 30th.

“These two memorable ones have been for people who have known me since I was a baby. They’ve seen me grow up and hassle them at the track, we used to get yelled at Nathan and I.

“I still get yelled at by them all so not much has changed.’’

It was Berry's second Group 1 win in a week having claimed the George Main Stakes at Randwick on September 19 and he's just getting started for the Everest Carnival as he rides Dame Giselle in the Flight Stakes and Rock in the TAB Epsom next Saturday.

Ole Kirk, whose dam Naturale is a full sister to Black Caviar, was badly held up for a run early in the straight as Berry searched desperately for room.

At that stage the odds-on favourite Rothfire had kicked away but was showing signs of distress – he would eventually finish fourth and pulled up lame with his TAB Everest prospects up in the air.

Berry, who completed a feature double with Subpoenaed taking out the Golden Pendant, had been bullish all week about Ole Kirk’s prospects and was vindicated as the colt held off his stablemate North Pacific with King’s Legacy running into third.

“He really deserved that win. His two runs this preparation have been brilliant,’’ he said.

“Because the field was so strong he was forgotten about to a certain extent.

“He has a devastating turn of foot but it’s only about 200m. It didn’t worry me being held up, what happened was when I went to come out Kerrin (McEvoy on Peltzer) went from going forward and taking me into it to the horse not finding anything.

“I ran onto the back of his feels. He was there to be beaten late and he stuck his head out and showed a good fighting spirit which all good colts have.”

It was Hall Of Fame trainer John Hawkes’ second Golden Rose, following Paratroopers in 2005, and co-trainer Michael Hawkes was proud to have produced two exciting colts to fight out the race.

“It is always hard. You always try and watch both horses,’’ he said.

“I could see North Pacific coming down the outside. To his credit he was very gallant in defeat. To put in the effort where he was to get back.

“Tommy just got held up. He had to wait for the right run. Probably that proved the difference.”

“Just by holding up. He was able to sprint that little bit better. They’ve streeted the rest. We’ve always had two really good colts.

“We’ve tried to separate them going forward. Obviously this is the Grand Final. To run one-two. Fantastic effort.”

All the results and replays from Saturday's Rosehill meeting