For all the talk about a clash or a two horse race or tactical battles in the Group 1 $700,000 Ranvet Stakes (2000m) at Rosehill on Saturday as far as jockey Tom Marquand is concerned they still all have to beat Addeybb. 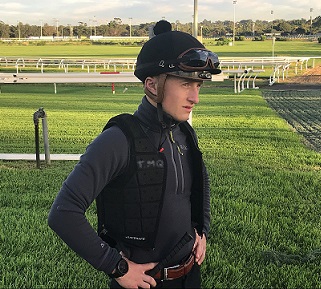 The respect for his main rival Verry Elleegant is definitely still there but Marquand is adamant his focus is on one horse and that’s the one he’s riding.

Aside from the extra four runners compared to the five horses that accepted last week, the new look Ranvet Stakes has seen Addeybb drawn in six and Verry Elleegant in one. A week ago he was drawn directly to her inside.

“I’m not really fussed where she ends up,’’ Marquand said.

“We know she is a very good mare and if she is on song she will put it right up to us.

“It’s added a bit of depth to the race with a few more runners.

“Last weekend everyone was saying it was going to be a trappy little race and a two horse race. Realistically now you’ve got a couple of runners that should be competitive but it’s the same aim, same goal, same place. I’m thoroughly looking forward to seeing what he can do.”

The last start Champion Stakes winner at Ascot is the $3 all-in TAB favourite for his defence of next month's Group 1 $4m Longines Queen Elizabeth Stakes and on Thursday held $2.10 sway in the Ranvet over Verry Elleegant ($2.80).

Addeybb had a three quarter pace gallop at Canterbury on Thursday morning with regular handler and trackwork rider Safid Alam in the saddle while Marquand partnered Favorite Moon.

The seven-year-old, rated the world’s best racehorse currently in training, won the Ranvet last year in what became a two-horse battle with Verry Elleegant from the 600m.

If the mare had an edge with her race fitness from two runs back, including her last start Chipping Norton win, since November compared to Addeybb being first-up since October that edge could have weakened slightly with the postponement of a week.

“It looks like it might have turned out for the best, we’ve had an extra week to get them even fitter and they’ve had more of a chance to acclimatise,’’ Marquand said.

“He looks absolutely great, his coat has had time to come on a little but more and apart from that he is where we want him. He tells you when he wants to go to the races and he’s been showing that for the last 10 days.

“I’m looking forward to getting Addeybb back on track and on the path to the Queen Elizabeth.”

Isabella Paul, trainer William Haggas’ representative in Sydney, said Addeybb didn’t need to do a whole lot in his Thursday morning gallop and is ready to go but stablemate Favorite Moon had a far more searching gallop.

It’s already been well documented that the four-year-old is lesser performed upon arrival in Australia than Young Rascal was but Paul said he has a bit of spunk and his fair share of ability.

“He’s only just turned four so we think there is plenty of improvement in him,’’ she said.

“He’s a lovely horse to have around, very easy, very funny. He did bite Ross the quarantine manager once which was a bit naughty but other than that he’s been an angel.

“He’s clearly a very talented horse and he’s been working out here with Addeybb, leading him, and holding his own so we’re pleased with that.”

Haggas is keen to get Favorite Moon, $6 with TAB, into the Group 1 $2m Schweppes Sydney Cup (3200m) and while Saturday’s race is considered a ‘prep run’ a win could be important given he’s weighted on just 50kg in next month’s feature.

If the Manion Cup becomes a staying contest it would play into the import’s hands as Paul emphasised based on his latest win at Haydock over 2817m in September.

“He was off the bridle three furlongs out and just ground it out, and ended up winning by nearly 10 lengths,’’ she said.

“He doesn’t have a huge turn of foot but he will definitely grind it out.”