These days training in partnership with Adrian Bott, the stable's representative is the speedy colt Unite And Conquer ($1.70 favourite on TAB fixed odds). The horse was sent to Melbourne for his only start at Flemington on October 6 where he blitzed the opposition by more than two lengths in the Listed Maribyrnong trial. Unit And Conquer bolted in with a recent Randwick trial. 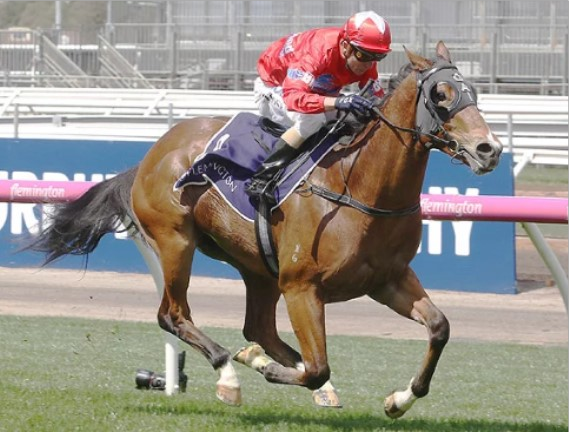 The talented Unite and Conquer in action. Picture by Racing & Sports

The Victorian filly Champagne Boom ($4.20) also has outstanding credentials. Trained by the Hayes-Dabernig team which won this race in 2016 with Madeenaty, Champagne Boom came from well back in the field to win the Listed Debutant Stakes at Caulfield on October 13.

In her only other start, the filly again came from back in the field to go down by a neck in the Group 3 Ottawa Stakes at Flemington. Top Victorian hoop Craig Williams is flying in for the ride.

The $100,000 Magic Millions 3 & 4-Year-Old Stakes is the main support race. Waterhouse and Bott have bright prospects of landing the feature double on Wednesday as they will saddle up favourite Invincible Star ($1.55) in the event. The mare was beaten a head by Ball Of Muscle in the Group 2 The Shorts at Randwick in September and was a last start winner of the Listed Starlight at Rosehill.

The Victorian Bel Sonic ($7) has a good record. He finished fourth behind Nature Strip in the Listed Creswick at Flemington in July. Bondi ($6.50), a Group 1 placegetter, will also contest the race.

RACE 1 (BJP PLASTERING CLASS 1, 1000M): Witherspoon ($2.60) is a fast filly and clearly the class runner. She was a close second in the Rosebud Prelude at Randwick in July after leading. The filly bolted in with an open trial on this track on December 3. Enjoy Elsie ($2.30 fav) won a Wyong maiden by more than four lengths last start and also is very quick. Lancaster Bomber ($6) has a place chance.
SELECTIONS: 1 WITHERSPOON, 5 ENJOY ELSIE, 2 LANCASTER BOMBER

RACE 2 (DNR ELECTRICAL METRO & PRO MAIDEN PLATE, 1600M): Chris Waller trains three of the seven runners and Collectively ($4.40) may be the best of the trio. She was narrowly beaten when second at Newcastle in October and her recent city performances were good enough to win this. The only female in the race Collectively has a pull in the weights. Shaman ($3.10 fav) was only beaten two lengths on debut at Warwick Farm recently on a heavy track and he will be hard to beat. Devil's Luck ($3.80) will appreciate the 1600 metres.
SELECTIONS: 7 COLLECTIVELY, 6 SHAMAN, 1 DEVIL’S LUCK

RACE 3 (MAGIC MILLIONS GOLD COAST IN JANUARY MAIDEN PLATE, 1350M): The Godolphin pair Nindamos ($3.40 fav) and Gremlin ($4) come off creditable trials. Nindamos is on debut and he ran on well under a hold in a recent Hawkesbury trial. McDonald rides and the 1350m is ideal. Gremlin had every chance on debut when beaten a length at Newcastle on debut on November 3. He was not extended in a recent trial. Winspear ($6.50) was narrowly beaten at Kembla last start and she has the rails barrier.
SELECTIONS: 3 NINDAMOS, 8 GREMLIN, 11 WINSPEAR

RACE 4 (MAGIC MILLIONS WYONG 3 & 4YO, 1200M): Invincible Star ($1.55 fav) has outstanding form for this race and she has the speed to overcome her wide draw. Only 11 days ago the mare won the Listed Starlight Stakes at Rosehill and three starts back she was a length behind Brave Smash in the Manikato. Bel Sonic ($7) won the Ballarat Magic Millions first-up on November 24 and she has a good record in Victoria. Bondi ($6.50) was runner-up to Seabrook in the Group 1 Champagne Stakes at Randwick in April and he races well first-up.
SELECTIONS: 3 INVINCIBLE STAR, 1 BEL SONIC, 5 BONDI

RACE 6 (MAGIC MILLIONS WYONG 2YO CLASSIC, 1100M): Unite And Conquer ($1.70 fav) was very impressive in his only race start when he easily accounted for his opposition down the straight in the Maribyrnong Trial at Flemington. He bolted in with a recent Randwick trial and he has speed to burn. Champagne Boom ($4.20) is a very smart Victorian filly which came from near last to win the Listed Debutant Stakes at Caulfield in October. She followed up with a close third in the Group 3 Ottawa Stakes on Melbourne Cup Day. Spaceboy ($5) was runner-up in the Rosehill Golden Gift on debut and is bound to improve.
SELECTIONS: 1 UNITE AND CONQUER, 6 CHAMPAGNE BOOM, 2 SPACEBOY

RACE 7 (MERCURE KOOINDAH WATERS B/M 64, 1600M): Everlasting Love ($2.60 fav) has a win and three placings from four starts this prep. She has never been out of a place in four starts on this track and she was successful here two weeks back. Look for a big improvement from Cyber Intervention ($9) as this trip is much far suitable. His only win was on this track close on 12 months ago. Sensacova ($7) ran on well into third place at Gosford last week.
SELECTIONS: 5 EVERLASTING LOVE, 3 CYBER INTERVENTION, 6 SENSACOVA