Intent to lead from a wide alley and being able to control the speed is what won the $1m Pages Event Hire Hunter (1300m) for James McDonald and Savatiano.

Punter’s Intelligence sectional data shows McDonald made the early play to lead running the first 300m in 18.63 – fast enough to enable him to give the mare some clean air and establish a rhythm.

They weren’t taken on so he was able to steadily back off the tempo in the middle stages then increase it again before going for home.

Savatiano ran about 1-1/2 lengths faster from the 600m-400m than the previous split and McDonald ramped it up as she sprinted three lengths faster for the section between the 400m and 200m.

Her final 200m was almost five lengths slower than that 400m-200m but by then the damage was done and McDonald had run the race to suit himself. She posted just 34.12 for the last 600m.

The eye-catcher was the runner-up Tactical Advantage who put beyond doubt his ability to run a strong 1200m (this race was 1300m) clocking 33.18 for his last 600m, clearly the best of the race, and a last 200m of 11.15 which was almost a length faster than anything else.

He was around 22m off the leader and winner in the middle stages and is one of three backmarkers, all well exposed sprinters, to impress on the clock.

And Siren’s Fury’s effort to run seventh is probably a bit hidden, her last 600m was 33.41 while her final 200m of 11.28 was bettered only by Tactical Advantage. 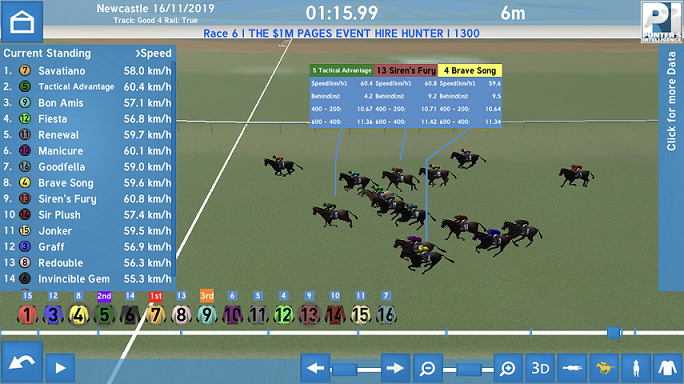 The Hunter was run almost six lengths faster than the Benchmark 88 that followed over the same journey, won by Into The Abyss.

The major talking point out of the race surrounded the luckless Outrageous and it’s safe to say he’d have been in the finish had a run presented for him at the right time.

He was beaten less than two lengths and, from a times perspective, had be been able to match Bobbing’s last 200m of 11.77 he probably wins the race.

As he does quite often Bobbing posted the race’s fastest last 600m of 33.67, his was a good effort to run fourth considering the race was run about three lengths slower in the early stages than The Hunter.

Arguably the win of the day came from Strome who managed to track wide throughout then steam away from her rivals in slick time over the 1500m.

Remarkably, she was the only horse to break 34 seconds for the last 600m in her Benchmark 78 race, posting 33.59 or more than three lengths faster than her rivals.

She covered an extra 10.4m in the run and yet was within 0.02 seconds of running the fastest 200m splits from the 800m home. Some win, it’ll be interesting to see if she can back it up.

The first two two-year-olds in the Max Lees Classic (900m), Tilia Rose and Redoute’s Image, showed both speed and a bit of stamina suggesting the future is bright.

Tilia Rose has the easier run and clocked 32.30 for her last 600m compared to 32.42 for Redoute’s Image. They ran identical splits from the 400m to the 200m but the wider run told on the latter in the closing stages.