A track record set by Mister Sea Wolf for the 1600m at Kembla Grange should see the form out of Saturday’s inaugural $1 million The Gong hold up.

And in the coming weeks that theory will be tested with a number of those chasing him home headed for the Group 2 Villiers Stakes on December 14 at Randwick.

The obvious take away from The Gong is the run of runner-up Quackerjack who covered more ground than any other horse in the race, an extra 11m, as he sat wide and worked his way up onto the pace before going down narrowly.

Third placed Star Of The Seas was responsible for the fastest last 200m of the race as he made a surge in 11.81.

It wasn’t easy to make ground from the back and out wide at Kembla, particularly in The Gong, so we have to respect the efforts of fourth placed Military Zone and fifth placed El Dorado Dreaming. 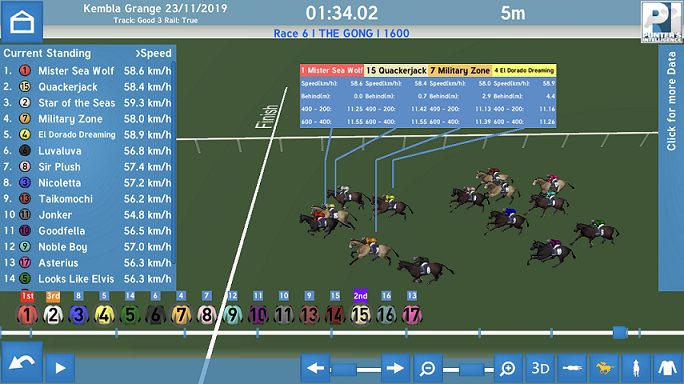 There was a mixture of eye-catchers and forgive runs in the Pages Event Hire Handicap (1200m) for the fillies and mares won narrowly by Kylease.

Godolphin mare Handspun sizzled running 33.18 for her last 600m as he went down by a nose, that section was more than three lengths faster than any recorded in the race (Lucicello’s chip didn’t work).

She’s an honest mare and there’s a race for her up to 1400m, preferably on a dry track coming up.

Misteed had plenty of admirers going into the race and she finished off from back right down the outside, not the preferred ground, running 33.80 for her last 600m.

Two-year-old Mrs Maisel blew her chances at the start when she veered out sharply and had to be dragged back, losing valuable ground.

Cinquedea made a nice return to racing in the 1200m Polytrack Handicap producing easily the fastest last 600m of the race of 33.86, about three-quarters of a length faster than anything else.

He was ridden for luck through the field and when he burst into he clear he ran 11.56 to be the quickest for the last 200m to set up what looks a successful summer campaign.