That knockout punch over the last 200m was again a hall mark of the outstanding win by Addeybb in the Group 1 $2m Longines Queen Elizabeth Stakes (2000m).

As he did in the Ranvet, and again aided by a smart Tom Marquand ride, Addeybb produced the fastest last 200m of 12.19 and, given his position trailing the leader, he couldn’t be beaten with that final furlong dash.

Punter’s Intelligence sectional data shows the six-year-old also recorded the fastest last 600m of the race as he ran 36.29, almost a length superior to the next best, off a fairly steady pace.

So Addeybb, in his favoured ground, outsprinted them again.

That adds some merit to the performance of Danon Premium, who clocked 36.42 to be second best for the last 600m.

He noticeably loomed early in the straight, his 400m-200m of 11.71 half a length faster than the eventual winner, but couldn’t sustain it presumably due to the going.

Master Of Wine’s fourth placing should attract plenty of interest too, he ran home in 36.52 and covered more ground than any other runner in the race with an extra 14.4m.

He proved himself in the best company around and is entitled to be a force in the spring. 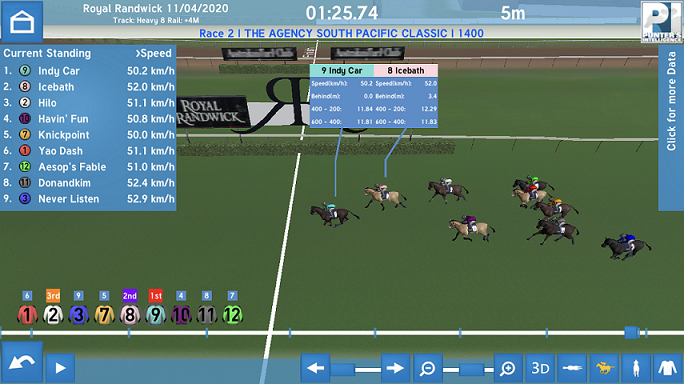 A potential rematch between Indy Car and Icebath, one-two in the South Pacific Classic (1400m), in the Hawkesbury Guineas at Rosehill later this month would be a mouth watering prospect.

They were the only horses to break 37 seconds for their last 600m in the Listed event with Indy Car fastest in 36.60 about a length and a half faster than Icebath’s 36.87.

But it’s been well documented Icebath had no luck at a vital stage while Indy Car had an unimpeded run down the outside.

Rock My Wand stamped herself a horse to follow next season, or if she races on this month, with an eye-catching fifth in the Group 2 Percy Sykes Stakes (1200m).

While all honours to the winner Away Game, Rock My Wand comfortably clocked the quickest last 600m of 36.12 as she ran on from last early.

The effort probably just told on her late as Away Game produced the best final 200m of 12.59 versus Rock My Wand’s 12.65 but it was an effort to remember.

Kudos also to See You Soon who was strong late and ran 36.24, second best, for her last 600m and you’d imagine she’ll come back a better filly in the spring.

It seems Flit has found her place as a sprinter as she again fired over the 1200m in the Group 2 Arrowfield Sprint, going down narrowly to Splintex, and ran a race best 36.37 for her final 600m.

She was also fastest over the final 200m, 12.71, so she clearly produces her best over the sprint trips on the fresh side.

Worth noting the first-up effort of Eleven Eleven in the same race, he loomed before knocking up late to run fifth.

Not far behind her was a cheeky second-up run from Madam Rogue, at $51, clocking 34.91 for her final 600m after turning last.