What can we say about Classique Legend’s sizzling TAB Everest win that hasn’t already been said?

Not only did he demolish a very smart field of sprinters he’s run eight lengths (at least) faster than the other 1200m races on the day, of course aided by a hectic early pace, and produced the quickest last 600m of the meeting (33.30).

It was clearly a supreme performance. 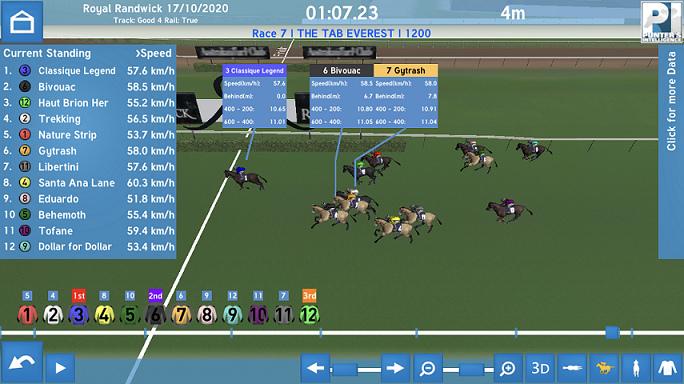 Standout had something of a hard luck story in the Group 3 Sydney Stakes but in running a close second to Trumbull he showed he’s back on track.

It was a clear return to form and he won’t be out of place in the Yes Yes Yes Stakes (1300m) at Rosehill on October 31, especially with Classique Legend leaving our shores.

All honours in The Kosciuszko to the winner It’s Me who overcame traffic to post the fastest last 600m of the race in 34.22 and easily the best last 200m of 11.73 (no other horse broke 12 seconds).

She’s clearly a talent but it’s a bittersweet win as she’s pulled up with a tendon injury, adding merit to the win, so she’ll be out of action for a while.

His last 200m dropped off a bit, suggesting perhaps he needed the run but he can drop sharply in class out of this race and win.

If there’s one horse to follow from TAB Everest day it’s Purple Sector, who had panels on his rivals in The Star Mile (1600m).

What’s ahead for him? So long as the tracks stay dry he can be a force in races like the Rosehill Gold Cup (2000m) and The Gong (1600m) in the next month.

It was a dominant debut performance in the Victory Vein Plate (1000m) from the Snowden-trained Captivant, particularly over the last 200m where he ran 11.35 or a length faster than the next best.

Behind him, though, a pair of Godolphin youngsters are worth looking at.

Bacchanalia made his run through the pace from near the tail to finish fourth, clocking 33.65, while Testimonial had to swing wide from last and she clocked 33.58 for the last 600m running into sixth.