Exciting three-year-old Anders set the standard for his peers with a dynamic win in The Rosebud at Rosehill on Saturday that was as good on the clock as it looked to the eye.

The colt didn’t have it all his own way in the early stages of the 1100m dash but he produced clearly the best sectionals over the concluding stages.

The big question is can he stretch that brilliance to 1200m and come onto the radar for a TAB Everest remains to be seen but the logical next step for Anders is the Group 3 San Domenico Stakes (1100m) at Rosehill on August 29.

There’s plenty behind the winner to highlight as well, the run of Ole Kirk first-up over a trip short of what will be his best had merit.

He ran a 35.64 last 600m as he made ground along the inside into second place and can only improve over a bit more ground.

Sixgun beat only two home but don’t forget he’s the horse that bounded in the air at the start and missed it by about four lengths. 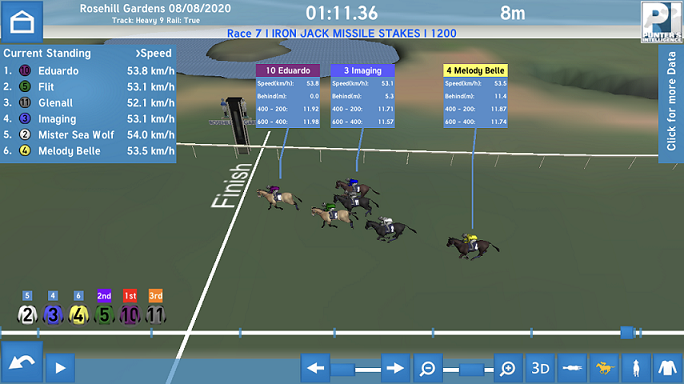 TAB Everest talk also surrounded the win of Eduardo in the Group 2 Missile Stakes (1200m) and he earned the right to enter discussions but sectionally his last 600m of 36.40 was second slowest.

That said he did some work early and was able to run the equal fastest last 200m of 12.50 so you can argue he did at both ends.

The two who shared that time for the final closing split finished at the tail of the field so there was merit in the runs of Mister Sea Wolf and Melody Belle over a distance below their comfort zone.

The unlucky runner of the Missile was third placed Imaging and there was plenty in his sectionals that suggest he’s come back in great order.

There were four 1200m events and, not surprisingly, the Missile produced the fastest time by well over three lengths.

Of those races the Rosehill Bowling Club Handicap (1200m) was the slowest but produced clearly the best sectionals given how slow the early part of that race was run.

The run of Minted into second place behind Tailleur is worth noting given he settled near the tail and, while he made ground along the inside, he ran a last 600m of 35 seconds and ran 11.97 for his last 200m so his effort sustain a sprint from the back was outstanding.