All eyes are on the two-year-olds at this time of year and it’ll be interesting to see how the form stacks up out of the juvenile race from Rosehill on Saturday.

Sancy ran up to her trials in taking out the Drinkwise Plate (1100m) which was run about six lengths slower than the benchmark race later in the day over the same distance.

The Punter’s Intelligence data from the race shows Sancy ran her last 600m in 34.39 with the crucial section between the 400m and 200m (11.20) where she asserted her authority.

Runner-up Centimental is probably the horse to take out of the race, the Snitzel filly clocked the fastest last 600m of 34.19 (more than a length quicker than the winner) and easily the best final 200m of 11.81.

She’s out of a Group 1 placed Kiwi mare who won up to 1400m and that placing was at a mile so she has a bit of scope to stretch out a bit in trip.

The jury may be out a little on Hinchbeast after he wasn’t able to adopt the same running style that took him to victory on debut. His last 200m of 12 seconds was only 0.01 slower than the winner so he was rallying late.

Interestingly, the two-year-old race won by Muntaseera a week earlier over the same trip was also run about six lengths slower than the benchmark event. Whether that’s a guide remains to be seen. 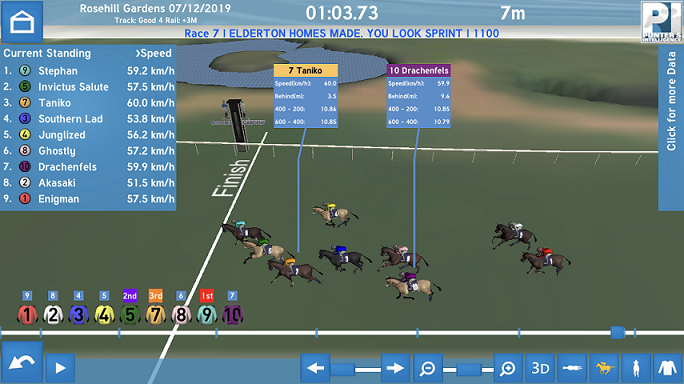 Godolphin mare Taniko appears set to strike second-up after posting the day’s fastest last 600m of 32.98 as she ran into third behind Stephan.

Her second-up form is misleading - she won second-up in her first prep and then should have won at her second run back last summer and struck a heavy track last time in.

A few forgive runs came out of the Bisley Workwear Handicap (1500m) won by Bobby Dee, a race dominated by the first three in the run.

Beaten favourite Starla didn’t settle well but ran 34.40 for her last 600m in running fourth, just 0.03 behind the race best of Pinup Miss (34.37) who finished in sixth place.

Keep an eye out for Kedah when she contests the Summer Provincial Series Final at Gosford later this month, she ran second last but posted easily the fastest last 200m of 11.58 (last 600m of 34.39) as she closed off strongly late.

A clever move from Kathy O’Hara to go to the front on Toryjoy proved to be a winning on in the final event but it was runner-up Strome who again hit the line hard, backing up a strong win at Newcastle a few weeks earlier.

Primitivo is also worth a mention out of that race, he ran eighth but his last 600m of 34.04 was clearly the race best while he ran 11.77 for a final 200m which was second only to Strome.