There’ll be plenty of interest in lining up the two-year-olds in the next six weeks as the $3.5m Longines Golden Slipper looms starting with last Saturday’s Canonbury and Widden Stakes at Rosehill.

Punter's Intelligence data breaks the race down further and shows Giselle Anne, who led the Widden, ran her first 500m in 30.28, some 0.82 faster than Exceed The Stars led the Canonbury (31.10).

Given the small difference in time at the finish the colts obviously ran their last 600m faster than the fillies – the official last 600m in the Canonbury was 35.01 vs the Widden 35.76.

The colt was on debut, the filly having her second start but was first-up.

Out of the Canonbury the run of runner-up Spring Loaded, another colt on debut, who posted the fastest last 600m of the two-year-olds in 34.54 was eye-catching.

Chris Waller debutants Rotator (11.80) and Magnate (11.73) clocked the fastest last 200m of their respective races and you’d expect both to have plenty of upside. 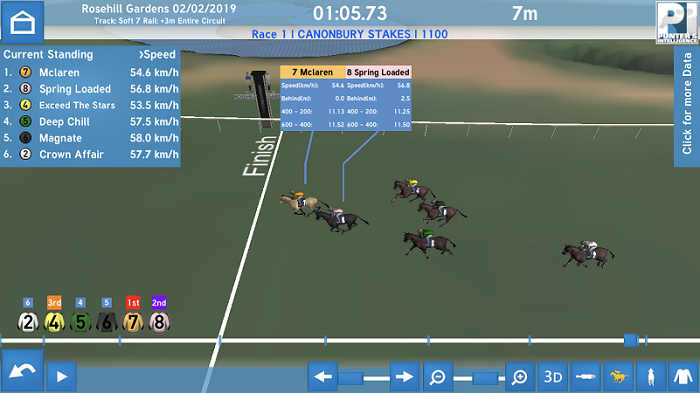 No doubt the star performer of the day was Alizee in her demolition of the Group 2 Expressway Stakes (1200m).

She was the only horse all day to break 34 seconds for the last 600m, running 33.72 and even then she looked to be in cruise mode.

What do we take out of Trapeze Artist running fourth?

The Expressway was run remarkably slowly early with Dothraki running 37.09 for the first 600m, by comparison the 1200m benchmark race won by All Too Royal they ran a first 600m of 36.17.

This adds some weight to Tim Clark’s assertion Trapeze Artist doesn’t react well to a sprint home. He ran 34.55 for his last 600m and it’ll be interesting to see how he fares if he lands in a race with som tempo.

Adana stamped himself a coming winner with a slashing first-up second behind Vegadaze in a race that was also a sprint home compared to the other 1400m event on the day.

While Embezzlement was too good in the TAB Highway (1500m) it might pay to forgive the run of A Snip Of Cyndy in finishing tenth.

Given the margin Embezzlement put on them it’s unlikely she would have won but it’s not a stretch to suggest she should have run second.