We knew he could reel off some sizzling splits on a good track and it seems Exceedance is just as dynamic on heavy ground, that’s what we can take out of the colt’s brilliant San Domenico Stakes win at Rosehill.

Punter’s Intelligence sectional data revealed the three-year-old easily posted the fastest last 600m of the meeting running 33.64 and not surprisingly the best last 200m of the day of 11.23.

Exceedance’s final 600m was just under three lengths superior to Bivouac (34.09) and his last 200m was two lengths faster. That’s some turn of foot.

For a horse who it’s believed will be even better once he steps up in distance he’s been explosive in his three starts at 1100m.

His next run will be his first attempt beyond that trip in the Group 2 The Run To The Rose (1200m) on September 14.

Speaking of explosive finishers, for a staying prospect Quick Thinker looked sharp in winning the Ming Dynasty Quality (1400m) first-up from a spell. 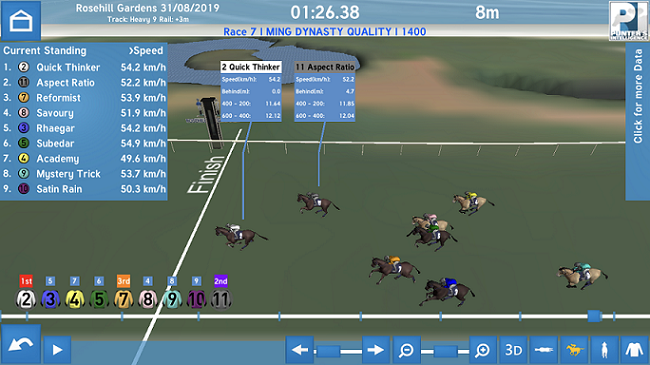 He’s being aimed at races like the Group 1 Spring Champion Stakes over 2000m.

Quick Thinker ran 35.82 for his last 600m and that was 0.7 faster, more than four lengths, than the next best Aspect Ratio.

A look at the Group 3 Premier’s Cup (1900m) and plenty of respect has to go to WA stayer Come Play With Me who did all the work up front tagging the leader but was still coming on the line in running second.

Ranier might be a horse to note down in the right grade after his much improved third in the TAB Handicap (1200m) at his second run back.

He’s never won first or second-up. Ranier posted easily the fastest last 600m of the race of 34.90, he was the only horse to break 35 seconds there, and his last 200m of 11.63 was about a length and a half faster than any other.

Another horse that is low flying at the moment is God Of Thunder who ran right up to his excellent first-up effort to win the ATC Handicap (1100m).

The race was run slightly slower than the San Domenico over the same trip but the first 500m of 31.40 was 0.85 quicker than the three-year-olds earlier in the day so it’s no surprise the younger horses could sprint home faster.

God Of Thunder posted a last 600m of 34.43 which was over three lengths faster than the next best in the race and his last 200m of 11.64 is over two lengths superior. He can be followed with confidence.