Godolphin has produced a smart late season two-year-old in the well bred Snitzel colt Andermatt and he’d just need to prove he’s not just a backmarker to be a horse to follow long term.

So far in his two starts he’s drawn wide and settled back so we can’t peg him as one-dimensional until we see him draw well and position closer.

But Punter’s Intelligence sectional data showed he was the standout from the Darley Handicap (1100m) as he ran a slick 34.57 last 600m, just on two lengths faster than the winner Anders.

Granted, the two-year-olds had first use of the track and Adelong ran in the last but it’s a good sign when the younger horses can clock quicker time than high benchmark horses.

There were plenty of eye-catchers to come out of the Adelong race, the Iron Jack Handicap (1100m), and again take nothing from the winner who just keeps winning.

She rode the speed set by Joey’s Destiny, who dropped out to run last, but was able to keep the chasers at bay. 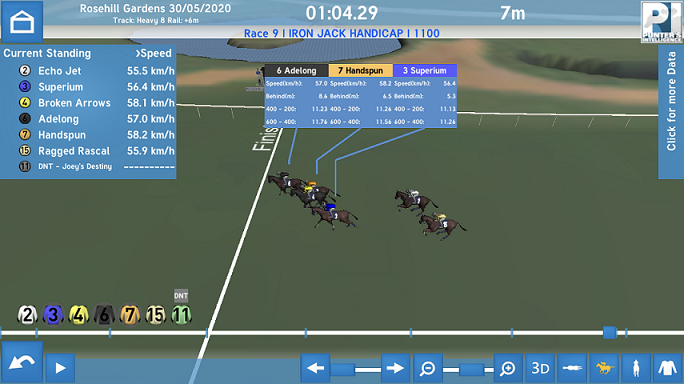 Handspun produced a similarly eye-catching first-up effort last preparation, at 1200m, then won second-up at 1350m and she’s not a noted wet tracker so it bodes well for her preparation.

He can improve and would also appreciate firmer footing.

There was a hard luck story in Bring The Ransom, fifth in the Magna Grecia @ Coolmore Australia (1200m), and if the tracks stay wet she may well atone soon.

The filly settled near last from a wide gate, the intention was to be ridden closer, and had she not been badly held up in the straight would have clearly posted the race’s best last 600m – as it stands she ran 35.08 to share spoils with Hulk who finished in fourth.

Yet again Trumbull posted the fastest last 600m of his race but yet again he missed the start and that is costing him races.

He clocked 34.48 which was about a length faster than anything else in the race, next best being the stayer Master Shuhood (34.64) in a handy return.

The win by Esperance was a comprehensive one, he ran 34.37 for his last 600m and that was two and a half lengths quicker than anything else in the Trapeze Artist @ Widden (1200m).

Fituese wasn’t disgraced in running second to a horse that is a good wet tracker and it might just have been the combination of 1200m and the wet track that was against her.

Her final 200m of 12.11, some two lengths slower than Esperance, suggests she just found the trip too tough in the conditions but back onto a firmer surface the 1200m should hold no fears in the future.

And Spencer stamped himself a coming winner with a race best last 600m of 35.51 in the Exceedance @ Vinery Handicap (1300m).

He handles the wet but wasn’t known as a heavy tracker previously and to run 0.04 faster than the winner True Detective, who had a perfect passage, says he’s racing very well.