What heights can Chris Waller’s exciting import Great House reach was the burning question from Rosehill on Saturday as the lightly raced stayer made it look oh so easy.

Punter’s Intelligence sectional data shows how dominant the four-year-old was in the ANZ Bloodstock News Handicap (2000m) at his second run back and just fourth race start.

Great House ran a last 600m of 37.58 as he bounded clear on a soft 7 track, that was three lengths faster than the next best from runner-up Harpo Marx (38.04) who was conceding 5kg to the winner.

He powered into the race running 12.27 from the 400m to 200m and even though he was allowed to coast in the latter stages by Tommy Berry, Great House still ran a last 200m of 12.90 and no other horse was anywhere near breaking 13 seconds for that section.

It’ll be interesting to see what the next move is, the win took Great House’s rating to 72 so you’d imagine Waller will look to pick off at least another benchmark race before testing him at stakes level.

Connections of most of the combatants in the Group 2 Iron Jack Expressway Stakes (1200m) would be pleased with the return of their charges but it was all honours to Savatiano.

Hugh Bowman controlled proceedings and was able to back things off in the middle stages, running 11.74 from the 800m-600m (0.01 outside the slowest), before gradually picking up the tempo in a perfectly judged front-running ride. 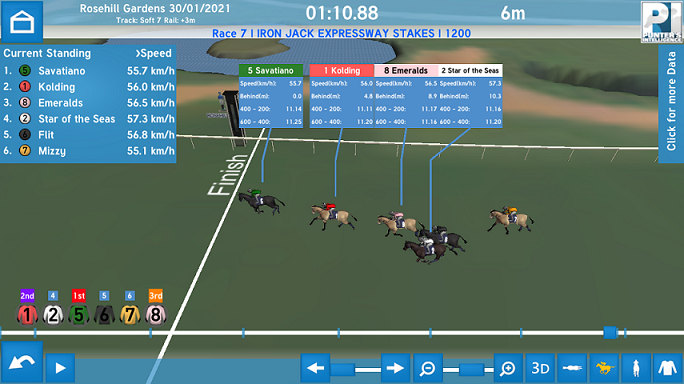 Runner-up Kolding clocked that fastest sectional of 11.11 as he made a pleasing return but no doubt many would have noticed Emeralds charging into third with the meeting’s fastest last 600m of 34.06 and the race’s best last 200m of 11.73.

And Star Of The Seas lost no admirers running into fourth with a 34.10 last 600m and 11.74 last 200m especially with the lack of pressure in the early to middle section of the race.

There’ll be plenty of attention on the two-year-olds between now and Golden Slipper day and honours went to Mallory for her win in the Group 3 Widden Stakes (1100m).

The first 500m section was put away by the fillies in 30.47 while the colts ran 30.84 – so the fillies were not only overall faster but they went out quicker and came home quicker too.

Of those behind the two winners, Vianello was alongside Mallory coming to the turn but had to make her run wide and she didn’t let down anywhere near as sharply (11.44 400m-200m) but did produce the race’s best last 200m of 11.72.

Home Affairs was a well supported favourite in the Canonbury and perhaps having just the one trial leading into the race on a wet track got him late as he sprinted the 400m-200m in 11.38 but tired noticeably with a 12.56 last 200m.

Third placed Sing A Love Song clocked the fastest last 200m of 11.82, a length faster than the next best.

There could be more wins in store for Canasta after his impressive win in the Schweppes Handicap (1400m).

Brutality is another who could easily win again after his performance in the Sky Racing Active Handicap (1500m) where his last 600m of 34.78 was almost a second faster (six lengths) than anything else in the race.

Godolphin would have been pleased with the return of Thermosphere in the final event over 1200m.