Fast times weren’t the order of the day at Rosehill on Saturday but the result of the Civic Stakes can give us plenty to take into a couple of feature Listed races coming up in the next month.

Punter’s Intelligence sectional data reveals that there are at least three other horses who stuck their hands up as contenders for races like the Winter Stakes (1400m) and Winter Challenge (1500m) in July.

We’ll look at them in finishing order.

New Tipperary (3rd) is not a first-up performer so for him to finish so close to the winner fresh says he’s come back well and he ran 35.80 for his last 600m. That’s about as good as he goes first-up, he’s won four from seven second-up.

New Universe (6th) is a polarising horse and he produced the second best last 600m of 35.28 but he was left with far too much to do despite tracking the winner into the straight. His 600m between the 1000m and 400m was easily the best (36.14). It all says he’s going well but needs the right set up.

Jury’s out a little on Seaway (36.10 last 600m) but he does have an imposing second-up record while no knock on Firsthand who fared best of those on the speed. 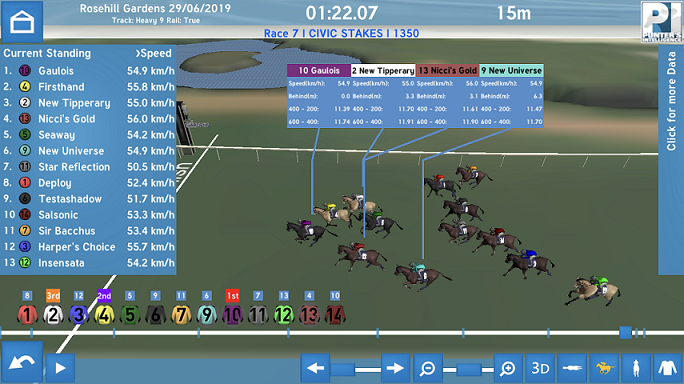 It seems the Ramornie Handicap at Grafton beckons for Top Striker after his slashing win over 1100m where he produced the best of the day for the last 600m (34.75).

That was more than three lengths faster than the next best in the race and if he can produce a similar sort of finish at Grafton he’ll go close up there.

There was plenty of merit in runner-up Goldfinch’s effort considering she led them up in that race, running 30.40 for the first 500m. She finished off in 36.06 so it was a big performance to hold on.

Two Godolphin three-year-olds attacked the line with gusto in a slowly run 1400m won by Call Me Royal – they are runner-up Phaistos and fifth placed Handspun.

The day’s Highway was run about a length faster than the three-year-old event and Phaistos surged late with a last 200m of 12.03, almost a length and a half faster than any other, to get within a half length.

Both horses can be placed to advantage in the coming weeks.