Shadow Hero has long been spoken of by trainer Mark Newnham as a potential superior stayer and he showed why with his dazzling performance at Rosehill on Saturday.

The Punter’s Intelligence data out of the Group 2 Gloaming Stakes (1800m) show just how dominant he was and why he’s the horse to beat in the Spring Champion Stakes over 2000m on October 5.

At the 450m mark of the Gloaming, Shadow Hero was 13m behind the leader and he’d hit the front by the 250m with a slick turn of foot.

The writing was on the wall with his first-up run in the Dulcify earlier in the month that he’d come back better and this only confirmed it.

Honours in the Group 1 Golden Rose (1400m) went to Bivouac for his fighting effort to take out the three-year-old feature where, once again, Exceedance was the sectional stand out. 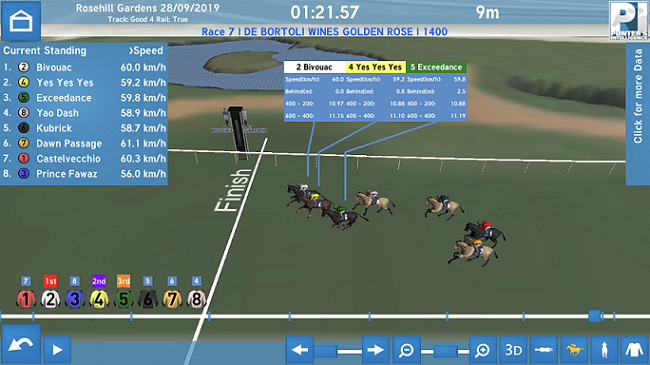 The tactical ability of Bivouac is a huge asset for the colt, the only sectional he was fastest in was early on where he ran 11.25 from the 1200m-1000m to establish himself on the speed.

What do we make of Castelvecchio? Sectionally, he appeared a bit too dour to go with the sharper three-year-olds given there seemed to be nowhere near the dash though he did run 33.82 for his last 600m.

Post-race he was found to have the thumps so that could provide some explanation, we’ll find out when he gets to the 2000m of the Spring Champion Stakes next.

The Golden Rose was run 0.7 seconds faster, or more than four lengths, than the Group 2 Golden Pendant over the same course as the leader Mizzy gained complete control.

Runner-up Champagne Cuddles clocked the day’s fastest last 600m as she ran 33.23 but as mentioned Mizzy was the stronger on the line there.

The big shock was the disappointing showing by Enticing Star as she laboured into fifth and cast doubt on her competitiveness for the TAB Everest.

Her last 200m of 11.60 was the second slowest of the seven runners so she was hardly attacking the line over the 1400m.

There should be a race over the carnival for Noire after her excellent second-up fourth in the Shannon Stakes (1500m) where he produced easily the best sectionals of the race.